Equity futures are slightly lower prior to the open, of course it is a Monday morning, need I say more? The dollar is significantly higher mainly against the Euro, bonds are flat, while both oil and gold are correcting their recent moon shots.

There is no economic data to report today and it’s going to be a light week. Thursday is Veteran’s Day and while the markets will be open, banks and the government are closed so there is no data that day either.

Looking over the charts this weekend is like watching “Night of the Living Dead.” The NDX has gone uninterrupted straight up since August and is up 29% since July. It is quite the spectacle of hot money to cover up functionally dead institutions and to inflate yet another bubble in the stock market – not that it’s really a market at all.

But the new highs do change the Elliott Wave count. It would appear to me now that the most likely count is that wave B is making an a,b,c formation and that we are currently inside of wave 3 up of c up. That leaves us with a wave 4 and 5 to follow, and that probably means more time chewing through the latest $110 billion per month until it is either put to rest or the criminals come through with QE3. If the dead are to remain in the realm of the undead, then QE3 is a given – so is the demise of our money.

Despite the count, I still do not rule out a triggering event that pops the bubble without notice. In fact I think the odds of an event that impacts the markets severely is quite high and getting higher. Fraud, when it ends, usually ends suddenly.

The head of the World Bank (criminal central) published an Op-Ed in the Financial Times this morning, here’s the key quote, "…should also consider employing gold as an international reference point of market expectations about inflation, deflation and future currency values.”

A gold standard? Yes, you are now being prepped. Remember, gold is THE most highly manipulated substance on the planet, it is FRAUD CENTRAL, and it is OWNED BY THE SAME CRIMINALS who have been wearing their DEBT PUSHING outfits. More proof of that is coming to light all the time, just check out this interview Max Keiser did with Jim Willie… part 1 is below, you can click through the video to the other two parts if you like, but this is important information on the depth of the criminal conduct (ht Jeff):


What’s most important is WHO controls the production of our money. Private bankers should run BANKS not our money system - that belongs to US not to them. They would be quite content to run a debt backed system for a few decades, steal everyone’s productive efforts, and then control them with gold backed money for a couple more decades, rinse & repeat for eternity.

Will we be smart enough to break free from their control?

Money, after all, is all about control.

And what kills me is how many people still can’t fathom what happened on Jekyll Island in the year 1910. This is CONSPIRACY FACT, a fact which the “Fed” celebrated at the scene of the crime this weekend, Bernanke was in attendance and even spewed more central banker drivel. Yes, they are MEETING TO CONSPIRE AGAINST YOU!!! Again, this is not theory, it is fact. It’s all about WHO controls the money, which is all about who gets the rewards from YOUR productive efforts.

For those who have yet to understand what the “Fed” is, it is a group of “Federal Reserve Banks” which are OWNED by PRIVATE banks, which are owned by a very small minority of PRIVATE INDIVIDUALS. They state the ownership trail in such a manner as to obscure the truth, but the truth is simply that. This never should have been allowed, banks should be private, but the money system belongs to the people. However, since the private banks have committed robbery and massive fraud, I have nothing against TEMPORARILY nationalizing the large banks in order to run them through receivership and wring out the criminal elements and infinite leverage. Put Bill Black in charge and stand back.

Remember, the “Fed” does nothing in your best interest, anything they do is in their interest, the damage to you only minimized by their fear that you may rise up against them.

And that is why they fund programs like food stamps where there are now 42 million Americans (13.5% of the population) surviving on them. The number of people on food stamps increased by 17% in the past year alone. How’s that for economic recovery?

And the Department of Labor is now asking once again for an extension to Emergency Unemployment Compensation (EUC) funding. Without authorizing more billions, emergency unemployment benefits will end for millions this month. Will they be extended? Certainly, the central bankers must keep the revolution down and will do so as long as they can get away with debasing our money, effectively taxing us all to compensate for their thievery.

That tax works to spike the cost of energy and food as the hot money pouring into the banks is exported around the world and is speculated in commodities that translate to higher costs for the majority of people.

JPM just put out a chart (criminals reporting on the havoc caused by themselves) showing the percentage of income spent on food and energy by income levels. What’s perfectly clear is how money debasement and Quantitative Easing work against the lower income brackets: 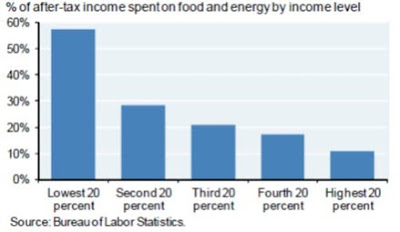 And here’s what JPM’s own analysts conclude:

“When the Fed considers the possible consequences of a falling dollar resulting from QE2, it should perhaps focus on food and energy prices as much as on traditionally computed core inflation. First, the food/energy exposures of the lower 2 income quintiles are quite high (see chart). Second, the core CPI has a massive weight to “owner’s equivalent rent”, which suggests that the imputed cost of home occupancy has gone down. Unfortunately, this is not true for families living in homes that are underwater, and cannot move to take advantage of it (unless they choose to default and bear the consequences of doing so). Due to the housing mess, there has perhaps never been a time when traditionally computed core inflation as a way of measuring changes in the cost of things means less than it does right now.”

No problem because the stock market is rising… more food stamps for everyone!

Fortunately the fraud is being talked about in wider and wider circles. Here’s a piece with information that certainly has been covered here many times, but this is formulated into something the masses can understand (ht Blonde Guest):


There’s only one way to end the fraud and criminal activity. Don’t expect someone to save you, help’s not coming. It has to emanate from the very people who are being victimized… the people down on Main Street: