The Battle Lines are Drawn as the Gold SPDR Consolidates

After a sharp decline in September, the Gold SPDR (GLD) moved into a consolidation the last two weeks. Support resides at 155 and resistance 162.50. Traders should watch these levels for the next direction clue. Also watch the Dollar. Gold bounced this week as the Dollar declined, but a bounce in the Dollar would be negative for bullion. 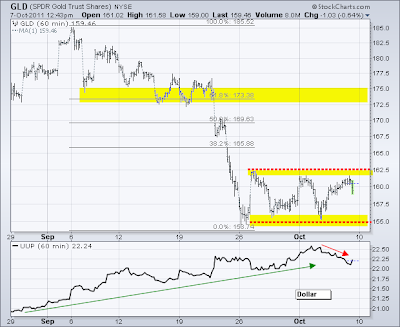 World on brink of disaster:

THE world is facing the worst financial crisis since at least the 1930s, ''if not ever'', according to the governor of the Bank of England.
Sir Mervyn King was speaking after the decision by the central bank's Monetary Policy Committee to put £75 billion ($A119 billion) of newly created money into the economy in a desperate effort to stave off a new credit crisis and a recession in Britain.
Economists said the bank's decision to resume its quantitative easing (QE), or asset purchase program, showed it was increasingly fearful for the economy, and predicted more such moves ahead.
Advertisement: Story continues below
Sir Mervyn said the bank had been driven by growing signs of a global economic disaster. ''This is the most serious financial crisis we've seen, at least since the 1930s, if not ever. We're having to deal with very unusual circumstances, but [will] act calmly and to do the right thing.''
Announcing its decision, the bank said that the euro-zone debt crisis was creating ''severe strains in bank funding markets and financial markets''. The Monetary Policy Committee (MPC) also said that the inflation-driven ''squeeze on households' real incomes'' and the government's program of spending cuts would ''continue to weigh on domestic spending'' for some time to come.
http://www.smh.com.au/business/world-on-brink-of-disaster-bank-of-england-boss-20111007-1ldxo.html