"Get the Heck out of Bank of America" says Senator Richard Durbin, on Senate Floor; Rep Brad Miller Accuses Banks of "Vulgar Profits"

Senator Richard Durbin of Illinois is telling Americans to "Get the heck out of that bank", right on the Senate Floor. His comments are in response to Bank of America hiking fees on debit cards.

Congressional Democrats are pushing customers to quit doing business with Bank of America Corp. and one lawmaker is looking to make it easier for them to do so as the biggest U.S. lender announced plans for new debit-card fees.

U.S. Representative Brad Miller, a North Carolina Democrat, introduced a bill today that would bar banks from imposing fees on people who close accounts, calling the proposal a response to the Charlotte, North Carolina-based firm’s plan to charge some debit customers an additional $5 a month.

“As megabanks flirt with menus of new fees, an increasing number of Americans will want to switch banks,” Miller, a member of the Financial Services Committee, said in a statement. “That is the way things work in a competitive, free market as unrepentant banks are still trying to rake in vulgar profits from their customers.”

Miller’s criticisms echoed those of Senator Richard Durbin, the Illinois Democrat who successfully pushed for legislation restricting the amount banks could collect from retailers for debit transactions. The two lawmakers spoke out after President Barack Obama questioned whether Bank of America has an “inherent right” to charge the new fee, which the company said was aimed at making up revenue lost because of the new limits on so-called interchange.

Bank of America's website continued to suffer sporadic outages on Monday, marking the fourth day that some customers have been unable to use its online services to check balances and pay bills.

"We're sorry, but some of our pages are temporarily unavailable," a note posted to the homepage for the biggest US bank read. "Thanks for your patience." The advisory, and sporadic outages, have greeted many people trying to use bankofamerica.com since Friday.

Bank of America spokeswoman Tara Burke declined to discuss the underlying cause of the outages except to say it isn't related to hacking, denial-of-service attacks, or other incidents related to security.

By not commenting, Bank of America is making matters worse.

Bank of America (BAC) Flirts With $5 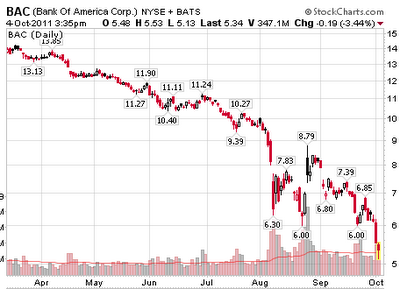 Note the late-August "Buffet is Buying" spike has been taken back and then some. The $5 level is crucial. Many mutual funds cannot hold stocks whose share prices drop below $5.

As an example of shoddy reporting please consider Exclusive: Buffett not worried by BofA share fall.

Billionaire investor Warren Buffett is not concerned by the sharp drop in Bank of America Corp (BAC) shares in the last couple of days, despite his $5 billion investment in the company last month, he told Reuters on Tuesday.

"We agreed to hold it for at least five years, so what I'm thinking about is where Bank of America will be in five years, and nothing in the last 24 hours or 48 hours has changed my views on that," the Berkshire Hathaway Inc (BRKa.N) chief executive told Reuters on the sidelines of Fortune magazine's Most Powerful Women Summit.

Buffett made his bet on Bank of America's survival in late August (though it closed in early September). The deal gave him preferred shares with a hefty dividend and warrants that represent 6.5 percent of Bank of America stock.

Of course Buffett is not concerned about share price of Bank of America. He owns the debt. His primary concern is the debt is paid back, not the share price. It is extremely sloppy reporting to not point this out.

Reader Blake writes "As a libertarian I am appalled that a senator would directly attack an individual company for pricing decisions made by that company."

Blake is correct in that stance. Senators should not make such statements on the floor of Congress.