In the lighter side of the news of those who comment on the news, I am pleased to report that Max Keiser won an Honorary Life Membership from University of Limerick for His Work as a Journalist Exposing Financial Terrorists

Moreover, I am also pleased to report that Charlotte Kemp Muhl, an American model and actress from suburban Atlanta, Georgia, and the youngest model to appear on the cover of Britain’s Harper’s and Queen magazine, just happens to be a big fan of the Max Keiser Report.

Given that it's fashion week in Paris, it is only fitting that Muhl would seek out the ever-stylish Max Keiser for a photo-op. 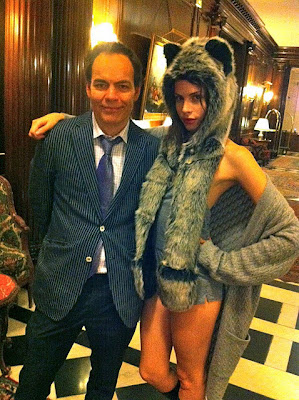 Given that it's extremely difficult to judge who in that picture is more stylish, I defer to my readers to decide for themselves.

In God I love fashion week in Paris!!! Max Comments: "This photo was taken by Charlotte’s boyfriend and band mate Sean Ono Lennon in the lobby of their hotel earlier this evening. Turns out Sean and Charlotte are big Keiser Report fans…. but I noticed they seemed to ask Stacy all the serious questions. Maybe I should go back to go-go dancing in the West Village."