Yesterday afternoon’s ramp just prior to the close was all rumor based once again that the Europeans may have a “solution.” Once again, that is simply false, and it was nothing but another manipulate the markets rumor. The fact the market moves like that is all you need to know about the quality of “investment” we’re talking about here. Let me put it another way – it’s no place for retirement money to reside.

As I mentioned yesterday, the VIX did close back inside of the Bollinger Bands, thus it did trigger a market buy signal. Not that I am playing in these criminal markets and I hope you don’t either, but if I were, I would be very careful with that as it is based upon nothing that is real, of course all the markets are no longer based upon anything real – they are a hollowed out fluff of central criminal games: 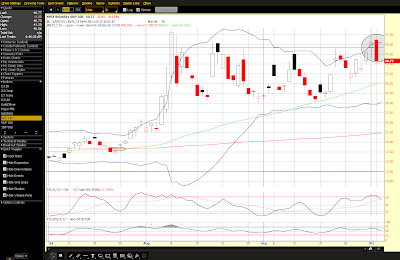 Here’s the type of ridiculous shell game that is transpiring in Europe right now:

Dexia May Be Left as ‘Bad Bank’ by Governments

Dexia SA (DEXB) may be left with the lender’s worst assets under plans that would allow the French and Belgian governments to avoid injecting more capital into the bank, two people with knowledge of the talks said.

Under the option most favored by the French, the two governments would guarantee Dexia’s borrowings before splitting up the lender, said the people, who declined to be identified because the talks are private. Belgium may then assume Dexia’s assets in that country, while France’s state-owned La Banque Postale and Caisse des Depots et Consignations would buy Dexia’s French municipal-lending unit, leaving Dexia as the “bad bank,” the people said.

That would avoid an immediate recapitalization of Dexia, which would then sell its legacy assets over time, the people said. If the lender transferred its bad assets to a new company, the bank would need additional capital because a sale would crystallize what are at the moment paper losses for Dexia, one of the people said.

A final decision is yet to be made and the negotiations are still fluid, the people said. The governments pledged yesterday they would take “all necessary measures” to protect clients and will guarantee all Dexia’s loans.

Belgian Finance Minister Didier Reynders said guarantees that will be provided will be “inferior” to the ones granted in 2008, when Belgium’s share exceeded 90 billion euros. He also said that Belgium has “no intention” of chalking up losses, adding that it will collect a fee in return for the guarantees. Dexia paid 489 million euros last year for use of guarantees, according to company filings.

You catch that? Here is an admission that the bank is full of “assets” which are “bad.” But no one wants to take any losses, so they will simply split the company up and use it as a “bad bank” to hold the rotten assets until they can be sold, but somehow, by some mysterious means no one will have to take losses! Oh, and it’s a “rescue!” Or wait, is it a “ringfence?” Because you know they must build a “fence” around the banks prior to letting Greece default so as to not shock the markets, LOL.

I’m thinking the Euro Yahoos have been taking lessons from Penn & Teller:

No, none of these types of shell games are going to work – the rot must be cleared out, it cannot be allowed to fester under the carpet. These games are the breakdown of the rule-of-law in progress! Schemes such as these are completely illegal in all countries – yet they somehow have become the standard of today’s central criminals and their politician puppets.

People marching in the streets? Yep, more and worse is deserved and coming. The rule of law will be reestablished, but it will be a long and painful process. Sad. None of it had to happen, the root of the problem is WHO it was that was allowed to control the production of money. No nation should have a national debt owed to any private individuals – period. It is completely possible and appropriate for nations to spend their own sovereign money into existence without debt. In fact, as long as they don’t they are not really a sovereign nation – they are a slave nation.

The morally bankrupt criminals running the MBA report that Purchase Applications for the prior week fell .8%, and that Refinancing activity fell by 5.2%. Hey, at least they aren’t posting those ridiculous and unbelievable double-digit one week moves – here’s econogullible:

Highlights
Purchase applications fell 0.8 percent in the September 30 week in a soft ending to a solid month. Mortgage rates, the lowest since the 1940s, are a positive for housing demand as they are for refinancing demand. The refinance index, though down 5.2 percent in the latest week, has been rising sharply. The report notes that many refinance borrowers are deleveraging by moving to 15-year terms with the maturity making up 27 percent of the week's refinancing volume for the highest share on record. The average 15-year rate is 3.49 percent, up three basis points in the week.

Nothing good about the Challenger Job-Cut Report, massive increase in mass layoff notices, AND hiring intentions are far below those of last year:

Highlights
A planned 50,000 troop reduction in the army and a 30,000 layoff announcement at Bank of America made for a swollen 115,730 total for Challenger's September layoff count, the largest total since the recession days of April 2009. Excluding the army and Bank of America, layoffs would have come in under 40,000 which is on the low end of trend. Still, today's results could be signaling increases ahead for jobless claims.

Challenger also offers data on hiring intentions which total 76,551, much weaker than 123,076 in September last year. Retailers including Halloween City, Party City and Toys "R" Us announced large hiring plans in the month but the retail sector's monthly total of 70,912 doesn't compare well with the 114,000 of last September.

How are those shell games working out for the economy? Every single one of those people should be out marching in the streets.

The ADP report is nothing but a chance for the market to be manipulated again prior to Friday's government version of manipulation Employment Report. This month ADP is basically holding steady on last month’s guess which was once again way off the base of what the BLS reported: