Equity futures are zooming on the news that the Employment Situation Report wasn’t a complete disaster as reported with 103,000 supposed Nonfarm jobs “created,” and a trumped up overall rate that remains at 9.1%. The dollar is down, bonds are down, oil is higher, gold & silver are higher, and food commodities are mostly lower.

Here’s Econospin’s report on the Employment situation to start us off:

Highlights
Job growth improved more than expected in September although the gain was held back by contraction in the government sector. Payroll jobs advanced 103,000 in September, following a revised 57,000 rise in August (originally flat) and revised 127,000 increase in July (previously 85,000). Analysts forecast for a 65,000 increase for September. Revisions for July and August were up net 99,000. Private nonfarm payrolls were somewhat stronger than the total, gaining 137,000 in September, following a 42,000 increase in August and 173,000 boost in July. The September number topped the market expectation for a 95,000 increase. A return of striking telecommunications workers added about 45,000 to the payroll total.

In the private sector, goods-producing jobs rebounded modestly while service-providing jobs posted a notable gain. Goods-producing jobs rebounded 18,000 after a 9,000 decrease in August. Manufacturing jobs fell 13,000 after a 4,000 dip the month before. Motor vehicle industry jobs were flat in September. Construction rebounded a sizeable 26,000, following a 7,000 decline in August. Mining grew 5,000, following an 3,000 gain the prior month.

Private service-providing jobs jumped 119,000 in September, following a 51,000 gain the prior month. The August gain was led by professional & business services (up 48,000) and health care (up 44,000). Employment in information was up by 34,000 over the month due to the return of about 45,000 telecommunications workers to payrolls after an August strike.

The public sector shrank as government employment fell 34,000, following a 15,000 rise in August. August would have declined other that due to a return of 22,000 Minnesota government workers from a partial government shutdown.

From the household survey, the unemployment rate held steady at 9.1 percent. The consensus expected a rise to 9.2 percent.

Today's report indicates that the labor market is not quite as sluggish as earlier believed. Importantly, the services sector may be gaining mild momentum. Looking ahead, today's numbers point to a healthy wages & salaries component in the upcoming personal income report. However, industrial production for September is likely to be soft outside of autos.

Interesting that the revisions for the previous months are higher, here’s the entire report from the BLS for your reading pleasure:
Employment September 2011

There is very little to be gleaned from reading the BLS’s positively biased narrative. They are intentionally vague and generally categorize big number changes as being negligible, such as the Employment Population Ratio which is going lower and lower making the rate look better than it actually is: 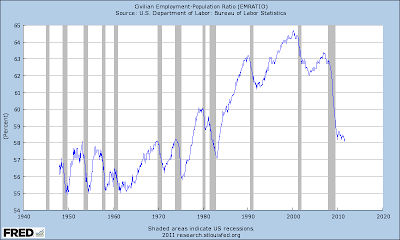 It’s very interesting when you look at the annual change in Household Credit and compare it to the Employment Population Ratio. Here you find that as credit built up prior to the Debt Saturation point that Employment followed. But credit went exponential, and that created the saturated condition. Credit then collapsed (year over year) right along with employment – this chart is further proof of Macroeconomic Debt Saturation: 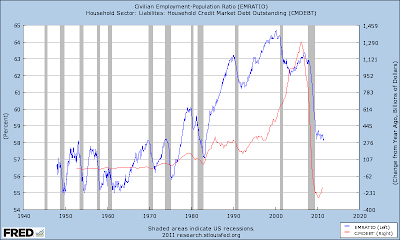 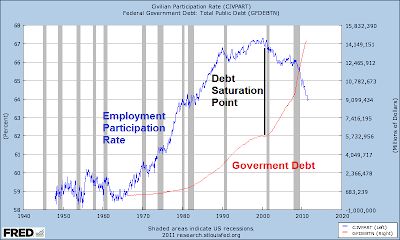 Obviously the rise in both Consumer Credit and Governmental credit came on the back of central bank engineering. There is absolutely no need for government debt whatsoever, that is the scam of the millennium.

When looking at the “Alternate” Table, we find that U-6 unemployment, that most closely resembling how it used to be tracked, fell from 16.1% to 15.7% unadjusted, but rose from 16.2% to 16.5% with the BLS’s seasonal adjustments included: 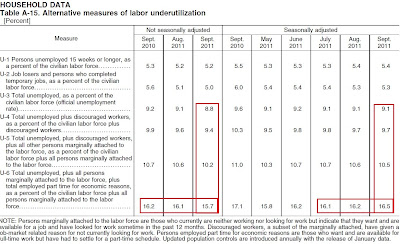 The phony “Birth/ Death” model actually was used to subtract jobs this month as September is typically one of months that seasonally losses jobs under their model. Amazingly, this year’s subtraction is larger than last year’s at -43,000: 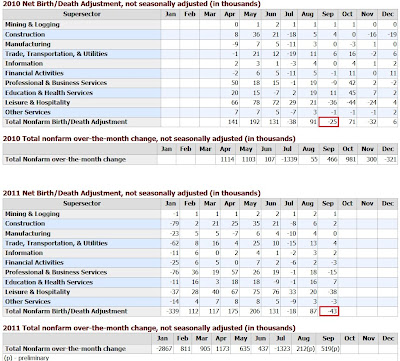 Of course what puts the lie to all the statistic gymnastics is not only the Employment Population Ratio, but also the Mean Duration of Unemployment that continues to rise unabated into the stratosphere of historic numbers: 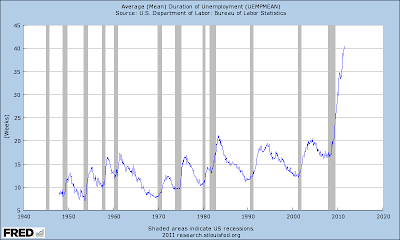 Again, look at how the Mean Duration of Unemployment tracks the injection of Base Money. While it would not be scientific to say that one causes the other, I believe that both are the symptom and reaction to the macroeconomic debt saturation condition, and this will not change until the debt saturation is cleared, although it must level off at some point: 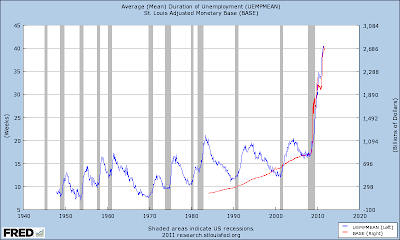 Of course John Williams at Shadowstats.com tracks the numbers and isn’t fooled. His Unemployment numbers are still rising and still pushing 23%.

Remember, you can fool some of the people, but not all of them…

The unemployment numbers aren’t the only thing rigged, and in that respect they share a common theme with the root cause of our economic problems. They are rigged because those who produce and control the production of money have their way with everything – unfortunately that includes the nuclear industry, and here’s Arnie Gunderson doing yet another great job of telling you exactly how special interest money and influence have created a dangerous situation inside of the nuclear industry:

Turning back to the “Occupy Wall Street” riots, it seems to me that many people still don’t understand what’s happening – not just the protestors, but also those on the outside commenting on them. While the protestors may not be perfectly on target, that’s not the point – the point is that they are disenfranchised, just as the “Tea Party” “conservatives” have been disenfranchised economically. Both groups are troubled, but they just have different flavors in reaction.

And with both sets of riots, there are attempts to discredit them – now with OWS there are accusations of people buying protestors to show up. What nonsense, there will be accusations and bizarre stuff whenever large groups get together. It’s the big picture points that matter – the people of the United States are rioting. You can marginalize that all you want, but you won’t change that fact – they are old, young, left, and right, and they come in a variety of flavors. It doesn’t matter what your flavor is, it is macroeconomic debt saturation that is at the root of your disenfranchised pain – and at the root of that are private bankers who were wrongly given control over the production of this nation’s money.

So, expect rioting to continue and to get worse. It doesn’t matter the flavor, the root cause is the same, and these riots are just one part of the “other events” that I’ve been telling you to expect all along. There will be more “other events,” and they will be much more serious before it’s over. These other events are what is going to bring the REAL CHANGE. It won’t be pretty, in fact it will be very ugly. That’s because real change doesn’t come at you from a $2,000 empty suit standing in front of a teleprompter!

I’ll be publishing a lengthy article later this afternoon about the importance of smashing false assumptions – I hope you come back and give it a read this weekend.