Equity futures fell sharply on the Employment Situation Report, but have bounced back to roughly even prior to the open. The dollar is down slightly, bonds are roughly flat after rising on the report, oil is higher, and gold is close to break-even.

Here’s Econoday’s take on the report:

Highlights
Today's report was mixed with payroll jobs underperforming and the unemployment rate unexpectedly dropping. Unfortunately, the payroll number is more credible and the rate decline is likely an aberration. Overall payroll employment in December gained 103,000, following a revised 71,000 rise in November and a 210,000 boost in October. The December advance came in significantly below analysts' estimate for a 160,000 gain. However, the October and November revisions were up net 70,000. Private sector payrolls increased 113,000 in December, following a 79,000 advance the month before. The consensus expected an 180,000 boost.

Within private services for December, leisure and hospitality increased by 47,000 while health care rose 36,000. Also, professional & business services gained 7,000 and were led by temp hiring, up 16,000.

Wage inflation remains anemic. Average hourly earnings in December edged up 0.1 percent, following no change the previous month. The December number matched the market median forecast for a 0.1 percent increase. The average workweek for all workers was unchanged at 34.3 hours, equaling expectations.

On a year-ago basis, overall payroll job growth improved to up 0.9 percent in December from up 0.7 percent the prior month.

Turning to the household survey, the unemployment rate unexpectedly fell to 9.4 percent from 9.8 percent in November. Analysts had called for 9.7 percent. The rate declined in part due to a notable drop in the labor force, suggesting the unemployment rate will rebound when discouraged workers return.

Today's report clearly is disappointing and takes some wind out of the sails of the consumer sector. While many indicators have been strengthening, the lack of improved momentum in the labor market will likely constrain overall resurgence for the economy. On the news, equity futures eased, the dollar dipped, and interest rates slipped.

As they mentioned, the Household Survey data produced a very large drop in the rate, falling from 9.8% to 9.4%. This part of the report was better than expected but once again is being fudged lower with large reductions in the size of the workforce – the “participation rate” dropped by .2%, which is a very large drop. The population of the United States is now over 310 million, and is growing at a rate of 1%. That means that 3.1 million jobs must be created each year just to keep up with that growth, that’s 258,000 jobs each month. Anything less than that means that the economy is net losing jobs, which we still are.

The number of “discouraged” workers increased dramatically in this report, rising by 389,000 in just one month! 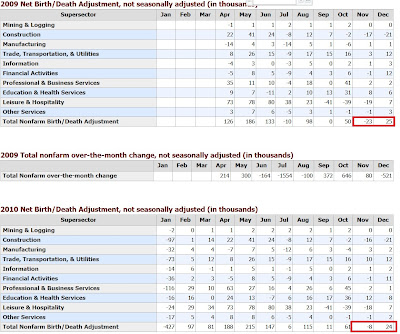 Fooling with the size of the workforce produces many distortions in the report. When we go and look at the “Alternative Measures” table, we find that U-6 (the measurement most closely resembling true unemployment) actually ROSE from 16.3% to 16.6% when not seasonally adjusted, but FELL from 17.0% to 16.7% with those adjustments. 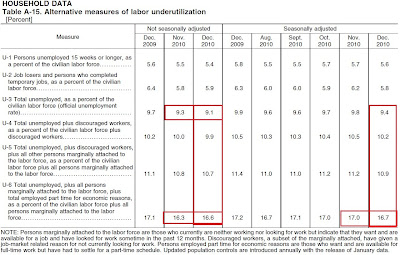 Note, however, that U-3 fell in both categories. That is just one result of simply saying that the workforce is shrinking because there are so many “discouraged” workers and so we just won’t count them anymore!

That’s nice, and it gives the media something to fool the masses with, a “low” and “improving” 9.4% rate! Party time, massive hiring is coming this year! (Suckers!)

According to ShadowStats, true unemployment is over 22%:

Our economy is marketing driven. It must be all good all the time or it just won’t sell. We’re all hucksters now, we don’t care about making or doing something well or innovative, all we care about is that the numbers keep growing and as a society we’ll do anything to make it appear that it is – even if it isn’t. Thus we are a mass delusional society, one that history is going to spank severely for our complacency.

Consumer Credit is released at 3:00 Eastern.

The market looks to me like a marathoner who is about to fall down just before reaching the finish line. The internals are getting worse as the market moves higher, not better. Divergences are historic in size and across all time frames. Yet we know that the market isn’t real, there are POMOs every single day to keep the illusion of growth alive. This illusion is going to end, I can guarantee you that, I just cannot tell you exactly when. If you are an “investor,” a part of your job before letting go of your hard earned cash is to perform due diligence. If you do that for most equity and debt market investments today, I believe that you will find FRAUD that underlies most and thus valuations are extreme when the fraud is removed. Owning something based on a fraudulent value simply is a sure way to get bit eventually. It’s sad, but it’s the state of America today – top to bottom, all levels of government, and in corporate America too, especially the entire financial sector and particularly in any company that is really a financial in disguise, like GM and GE.

Marketing and fraud, right on down the line: