Stocks are roughly flat at the open this morning, the dollar is up as Moody’s downgrades Ireland’s debt once again, bonds are higher, and both oil and gold are up slightly. Today is Quadruple Witching day, expect heavier volume.

Speaking of heavy volume, massive volumes of Visa and Mastercard sold off as the “Federal Reserve” proposed new rules that would dramatically limit the amount of processing fees they can charge on debit transactions. Shares of both fell by approximately 10% and the selling continues this morning: 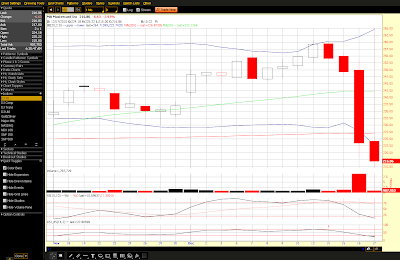 While I wholeheartedly support limited fees in what amounts to a duopoly, I would rather have unfettered competition and I also question the “Feds” ability to propose and to implement such a rule on entities which are not banks under its jurisdiction. Of course Congress has simply turned over the economy to the private banks (“Fed”), so I guess it’s just business as usual for the “Fed” to dictate terms to everyone else. Still, this should help smaller businesses and consumers:

NEW YORK (CNNMoney.com) -- The Federal Reserve rolled out a proposed rule Thursday that caps the fees banks can charge retailers when customers swipe their debit cards.

The rules would likely hurt credit card network companies Visa and MasterCard the most. Shares of Visa closed nearly 13% lower following the news, while shares of MasterCard (MA, Fortune 500) slipped more than 10%.

Under the proposal, merchants would be charged no more than 12 cents per debit-card transaction, the Federal Reserve Board said at a meeting Thursday.

Mandated by the Dodd-Frank Wall Street reform act and part of a measure introduced by Senator Richard Durbin (D-Ill.), the fee cap aims to make "swipe" fees -- also known as interchange fees -- "reasonable and proportional" to what it actually costs banks and issuers to authorize, clear and settle transactions.

The rule is open for public comment until Feb. 22. After the comment period ends, the Fed will consider recommendations and make revisions if necessary.

Along with the main issuers MasterCard and Visa, profits for big banks are also likely to suffer under the new rule.

With average interchange fees currently running from $1 to $1.30, the 12-cent cap will cut these charges by up to 90%, JPMorgan analyst Tien-tsin Huang wrote in a note to clients.

Moshe Katri, an analyst at Cowen and Co., said Wall Street had been expecting a 50% cut.

Bank of America (BAC, Fortune 500), one of the nation's largest issuers of credit cards, estimated in July that a cap on interchange fees could drain $1.8 billion to $2.3 billion from its annual debit card revenue.
"The rules proposed by the Federal Reserve today will have a dramatic impact on the cost of banking services for consumers nationwide," the American Bankers Association said in a statement. "They essentially relieve retailers of paying their fair share for a card payments system that offers them tremendous benefits."

In its meeting, the Fed acknowledged that the rule could impact debit card use, by leading issuers to eliminate rewards programs for debit cards or encourage consumers to use other forms of payment.
But the Merchants Payments Coalition said the cap is much needed, given that swipe fees have tripled since 2001, costing retailers more than $48 billion last year alone.

"For years, big banks and credit card networks have used hidden fees and fine print to keep consumers and merchants in the dark, setting rules and raising fees with impunity," the coalition said in a statement. "Reining in these out-of-control fees will bring savings to small business and consumers struggling to make ends meet."

It would be a win for consumers because the lower costs for retailers could result in savings for customers.

"The proposed regulations will benefit consumers by lowering the billions of dollars annually in non-negotiable swipe fees paid by merchants to large banks and the dominant credit card networks," Ed Mierzwinski of the U.S. Federation of Public Interest Research Groups said in a statement. "Lower swipe fees mean lower prices at the checkout counter."

That is a very sizable cut in fees and if implemented will greatly impact Visa and MC’s bottom lines.

The largest owner of the “Fed” is JPMorgan. If you pay attention, you will find that not only is JPM the world’s largest holder of derivatives, but they are also the ones who are always in some way connected with unethical market manipulation such as silver and oil manipulation (all markets really), they were Madoff’s banker yet didn’t expose him (because of big profits), and now we are learning more details about an ex-JPM banker who is involved in municipal bond market price rigging:

Dec. 17 (Bloomberg) -- A former JPMorgan Chase & Co. banker who conspired to fix prices on municipal-bond investment contracts said he was aided by a Minnesota company that ran auctions for the deals on behalf of public agencies.

James Hertz, 53, who admitted fraud and conspiracy charges, said Sound Capital Management Inc., an Eden Prairie-based financial adviser to local governments, told him what a competitor bid so he could adjust his offer and win the deal, according to a transcript of his plea hearing Nov. 30. The charges say Hertz received tips about other bids from “Broker E,” an unidentified Minnesota firm.

“This resulted in JPMorgan Chase being awarded the contract at an increased profit,” he said during his court appearance.

And there you have it – yet another example of market rigging profiting JPM at everyone else’s expense. It is clear that JPM and the other banks that comprise the “Fed” have a serious issue with morals and ethics. They have grown far to powerful, the big banks and the “Fed” need to be broken up now.

While Moody’s is downgrading Ireland, S&P had threatened that should we extend the Bush era tax cuts that our mounting deficits could jeopardize our joke of a triple-A rating. Yet it appears that we are going to do exactly that, yet Congress can’t even pass an authorization to lift the cap on the deficit spending that’s required. All I can say is that the math doesn’t work in any way, shape, or form and that we are absolutely bankrupt as a nation. Money printing will fail to help the economy, it will only hurt it in the long run.

Meanwhile McHugh brought up an interesting point about the now confirmed Hindenburg Omen. He noted that there was wide media attention covering the last one in August, but that there has been no mention of this current one. That is interesting – it seems the last one got a lot of attention because the one prior led to the ’08 crash. Can we only remember as far back as the last one? Well, the one in August may not have led to a major decline, but I would be cautious betting that two in a row will not. Of course market participants (HFT owners) believe that the “Fed” has their back and thus they cannot lose. Oh yeah, just like Visa and MC.

I still think the markets are vastly overvalued – “earnings” are based only upon accounting fraud and any supposed economic growth that’s occurring is also based upon the same accounting fraud coupled with a devaluation of our money. Measure things in money that’s going down and you will have APPARENT growth. Real growth is another matter entirely. Mark the bank’s asset to market and you will have a market that is worth far, far less than today’s value. This true valuation will eventually assert itself given time.