Equity prices are roughly flat heading into the open this morning. Bonds are lower, the dollar is lower, oil, and gold are also slightly lower. The Yen continues to gain strength and has already passed previous areas that have triggered intervention. You can see on the weekly chart below that it has fallen below the bottom of the falling wedge and is nearing previous lows – down on this chart equals stronger yen: 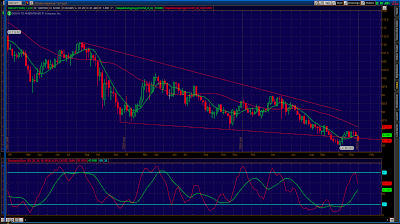 Weekly Unemployment Claims came in at 388,000 for Christmas week. Of course the media is touting it as a big deal, but of course it is just another contrived holiday week number where seasonal adjustments made it look far better than it actually is. Without those seasonal adjustments, the actual number of claims, even with the holiday, ROSE by 24,879! Here’s Econospin:

Highlights
In what the government describes as a clean report, initial jobless claims fell a very steep and very surprising 34,000 in the December 25 week to a suddenly sub-400,000 level of 388,000 (prior week revised 2,000 higher to 422,000). Adjustments become a big factor during the shortened weeks of the holidays which focuses attention on the four-week average, and the average confirms improvement in the labor market, falling a steep 12,500 to 414,000.

Results on the continuing-claims side are mixed. Slightly more received continuing benefits in the December 18 week than the prior week and the unemployment rate for insured workers rose one tenth to 3.3 percent. A drop in the four-week average is the positive news, down slightly to 4.120 million and down more than 150,000 from the month-ago comparison.

The month-ago comparison for initial claims shows a dramatic 50,000 improvement with the four-week average showing a less flashy but meaningful decline of about 15,000. The Labor Department's confidence that calendar and related adjustment factors are not at play gives today's report special importance. Yet declines in claims during November didn't add up to improvement for underlying payroll growth, that and yesterday's data on consumer confidence, where assessments of the jobs market deteriorated, will limit confidence that payroll growth has picked up this month.

I read the same report from the DOL as they do… they did not say anything of the sort about them being “confident” that there were no special factors – in fact they are simply silent about it. While it would be nice if this number could get below 400k and stay there, I suspect that this week will prove to be an outlier due to the holidays. The trend is certainly down though, and year over year numbers are only down slightly. Note that the RATE actually increased in this report which tells me that games are being played with the figures and possibly the size of the workforce. Bottom line is that this number still shows continued job losses, not job creation – it needs to get below 350k and stay there to indicate job expansion.

The Chicago PMI is released at 9:45 Eastern this morning and will be followed at 10:00 by Pending Home Sales. I’ll report both inside the daily market thread. Tomorrow is New Year’s Eve, markets will be open but there are no scheduled significant economic releases until next week.

Yesterday was the last scheduled POMO of the year. They will pick up again next week on Tuesday January 4th, and will run every day of the week through Friday. This must eventually end, but can it? And what will be the result if it does? Sad and frustrating to watch our government let/encourage private banks take over our markets. This does the exact opposite of promoting a healthy and dynamic economy. It allows pig companies that have failed to still exist and thus block out innovation and true competitiveness.

Meanwhile the markets drift higher on nothing volume. Severe divergences are in place on all time levels up through monthly. The RSI divergence on the weekly charts is as large as at the ’07 top. Can POMO hot money keep markets aloft indefinitely? I think 2011 will answer that question – and I think the action in gold and silver already have.