Equity futures continue to drift higher this morning on extremely low volume. The dollar is down, bonds are up slightly, oil is again pressing $90 a barrel, and gold is down a little while food commodities continue to climb into the stratosphere.

Good thing that there’s plenty of money to placate one in seven Americans with food stamps. Otherwise there just might be hard enough times to cause an uprising that could stand a chance of brining meaningful change instead of meaningful money destruction:

1 in 7 Americans rely on food stamps

PICNEW YORK (CNNMoney.com) -- The use of food stamps has increased dramatically in the U.S., as the federal government ramps up basic assistance to meet the demands of an increasingly desperate population.

The number of food stamp recipients increased 16% over last year. This means that 14% of the population is now living on food stamps. That's about 43 million people, or about one out of every seven Americans.

In some states, like Tennessee, Mississippi, New Mexico and Oregon, one in five people are receiving food stamps. Washington, D.C. leads the nation, with 21.5% of the population on food stamps.

"The high unemployment rate caused the high participation rate," said Dottie Rosenbaum from the Center for Budget and Policy Priorities, a think tank.

But it's not just the nation's stubbornly high unemployment rate of 9.8% that's driving the increase in food stamp use. Some states are expanding their definitions of poverty to include more people.

At the same time, the 2009 American Recovery and Reinvestment Act boosted annual funding to the nationwide food stamp program, known as the Supplemental Nutrition Assistance Program, by $10 billion.

The average recipient receives $133 in food stamps per month, according to the U.S. Department of Agriculture. That amount varies from state to state; in Hawaii the average is $216, while it's $116 in Wisconsin.

But the Recovery Act funding increased the maximum food stamp benefit by 13.6%, which translates to about $20-24 dollars per person per month.

The U.S. government considers food stamps to be effective stimulus for the economy, because the recipients usually spend them right away.

And see, the media gets to tout that we “only” have 9.8% unemployment instead of the more than 17% or more that exists in reality. Sigh…

Not to worry because the “Fed” in all their glorious wisdom will continue to kill the value of your money by not only buying up every single piece of worthless debt in America, but they will provide “liquidity” in the form of “Swap lines” with the world’s other central banks so that they too can keep the dollar killing money pump going:

Dec. 21 (Bloomberg) -- The Federal Open Market Committee authorized the extension through Aug. 1 of its temporary dollar liquidity swap arrangements with the European Central Bank and the central banks of Japan, Canada, Switzerland and the United Kingdom.

The arrangements, established in May, had been authorized through January, the Federal Reserve said today in a statement.

One world government? Seems we already have one and Bernanke is the figurehead world President. Don’t worry about the debt in Europe though, we have that covered because Americans can afford it.

No economic data today, just POMO after POMO. There will be two POMO’s today, should be more than $10 billion plus. Isn’t that special? Why I’ll bet you’re feeling more wealthy already. 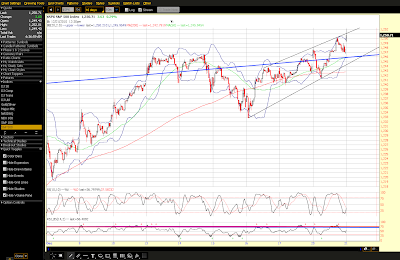 …That’s inside of another rising wedge pattern in the longer term: I hope you’re enjoying time with your families in front of the holidays, don’t follow the debt example of our national leaders and be sure to teach your children well…