The headline numbers came in at 9.8% which is up from 9.6% over the past three months, while the payroll number came in at 39,000, down from 151,000 and a severe miss from expectations of 168,000. I was pointing out earlier that November was likely to be a miss due to the lack of fictional additions from their phony “Birth/Death” model.

Below is the entire November Employment Report, note the announcements regarding upcoming changes to the way this report will be calculated.:

Highlights
Today's employment report stands out-unfortunately as a stray from the other good news this week. Payroll growth for November was unexpectedly soft and the unemployment rate rose. Payroll employment in November increased a soft 39,000, following a revised 172,000 boost in October and a 24,000 dip in September. The latest figure fell short of the median forecast for a 168,000 advance. The September and October revisions were net up 38,000. Private sector payrolls increase 50,000 in November, following a 160,000 boost the month before.

Weakness in the latest month was in goods-producing and government sector jobs. Good-producing employment declined 15,000, following a 3,000 rise in October. In the latest month, manufacturing fell 13,000; construction slipped 5,000; and mining rose 4,000.

Average hourly earnings were flat in November after rising 0.3 percent the prior month. The latest figure came in below the consensus projection for a 0.2 percent increase. The average workweek for all workers was unchanged at 34.3 hours, equaling expectations for 34.3 hours.

Turning to the household survey, the unemployment rate bumped up to 9.8 percent from 9.6 percent in October, topping analysts' forecast for 9.7 percent.

The latest employment situation clearly is disappointing. However, it very much is a curiosity as it is a stark contrast with the recent string of good economic news. At a minimum, there are two theories. First, businesses are still reluctant to hire despite improved demand. Second, the ADP report earlier this week showed strength in hiring by small businesses. This sector is a weak point in the government statistics for payrolls and could improve with revisions. In fact, the BLS is starting to update its establishment birth/death factors on a quarterly basis for January 2011 data for release in February.

From my perspective, it was last month’s report, just in front of the elections, that was the outlier. Note that we have had two full years of huge job losses in the private sector and now we are shifting to huge job losses in the public sector as huge and mounting deficits begin to strike all levels of government. Also note how once again the ADP report just flat out set expectations in the wrong direction.

The headline rates are artificially lowered by failing to recognize those who most certainly could and would work, but who are outside of their parameters. When we look at the table showing the “Alternate” Series, we can see that U-6, the measurement most closely resembling calculations of the past, seasonally unadjusted rate jumped from 15.9% to 16.3%, while the seasonally adjusted rate remained steady at 17%. 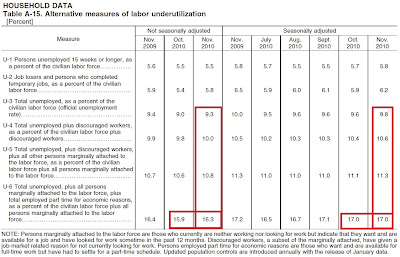 And sure enough, when we look at the Birth/Death model adjustments they were negative for the month, but not as severely as they were last year. If this correction would have been as large as last year’s, then the payroll number would have been even worse: 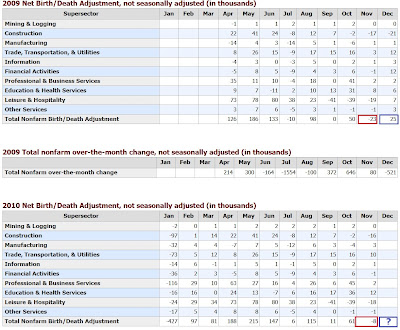 Next month should be a mild addition of jobs via this model, and thus we can probably expect a report that doesn’t miss as badly as this one did. When you remove the L from the BLS data, you will find that the job situation has not improved, and that there are millions who are able to work full time but are not.

Factory Orders and Non-Manufacturing ISM is released at 10 Eastern this morning and will be reported inside of the daily thread.

SPX 1200 indeed acted as support yesterday. With $8 billion+ POMOs every single day in December, and now with Europe also artificially buying up bonds all over the place, the markets are enjoying a phony money lift. That lift is bleeding over to oil and is fluffing up momo bubble stocks that are overvalued to extreme levels.

From a wave perspective, we are clearly inside of wave 5 up. 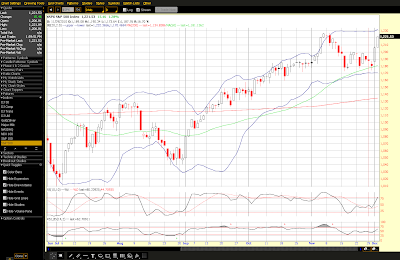 Wave 5’s can either extend or truncate. If it is equal in length to wave 1, then it may reach the 1300ish level. If it equals the length of wave 3, which is unlikely, then it could reach as high as 1362ish. The McClellan Oscillator turned positive again, and many indicators have turned to buy signals. However, the divergences are huge and across all time frames up to monthly. Short term indicators are also divergent again.

When wave 5 peaks, people who view the count as bullish will see the next decline as a large wave 4, while those working bearish counts will view the A,B,C over to complete wave B, and then will call for a very large wave C decline. I believe that wave C is still coming, however remain open to the possibility that a torrent of money fleeing from worthless debt instruments forces everything else higher. The end result will be the same regardless, nothing will change until we eliminate our debt saturated condition, and that will require changing WHO controls the production of money.