Obviously from a gold background, Mike Maloney does a good job presenting to a group of Russian bankers what they probably don’t want to hear. Indeed, our currency is on a collision course with math that simply doesn’t work. Our bankers do have choices – they can either let deflation run and allow another future debt cycle, or they can continue to attempt to stimulate in which case our dollar eventually becomes worthless.

We have a very important election at hand. Changing out politicians will likely result in the inability to stimulate as easily as they have in the past couple of years – that is the foundation of wave C down, it represents a psychological shift because the stimulus that created wave B (the dead cat bounce) has FAILED. Maloney’s market analysis is good. His money analysis is also good, but don’t be fooled, there is currently NO real banking reserves of any kind. Derivatives and the swapping of worthless debt to the Fed have pushed the real overall reserves to zero, thus fractional ability is infinite! (ht Mr. Guest)


Those who truly understand charts, and the math that creates them, will see a parabolic rise, and collapse. Yes, there is a clear Head & Shoulders pattern forming. Note, however, that if the right shoulder is symmetrical time wise with the left, that we may be range bound for some time (a large descending range) as the left shoulder required approximately 3 years to complete, not that they must be exactly proportional… 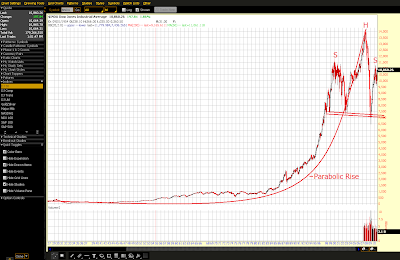