Equity futures were ramped upwards all night long and spiked higher on the Durable Goods report this morning despite it being overall worse than expected. Bonds are sharply lower, the dollar is sharply lower, oil is higher, and gold set a new record, this time breaking the $1,300 mark.

Once SPX 1130 was broken again, more short covering fueled this morning’s spike. While there is obviously record amounts of bullish sentiment in the markets, there are also a large number of non-believers, like myself, who are ready to short weakness. That was obvious as we first broke 1130 yesterday and the put/call ratio zoomed to more than 1.50! That was an indication that too many were shorting 1130, and thus the market promptly reversed. The bears were forced to cover, but then as that pressure subsided, the market eased back down to close below that level. This morning’s spike may be indicative of funny business as the FX markets look very volatile. The Yen, for example had a huge spike overnight that then rapidly came off, as in all of it. This Yen strength is despite massive intervention by the Japanese to force Yen weakness (down on this chart is Yen strength): 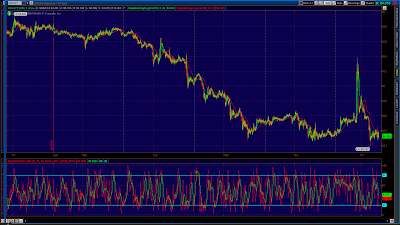 Yesterday the dollar bounced and tested its break down from the neckline of its H&S pattern. Today it has broken down to new lows. This pattern is confirmed and valid, it has a target of 71/72ish which can set off a chain reaction of even lower targets as I discussed previously. A falling dollar is not good for Americans, and no, the markets will not appreciate the knock-on affects as corporate earnings will eventually suffer dramatically for it: 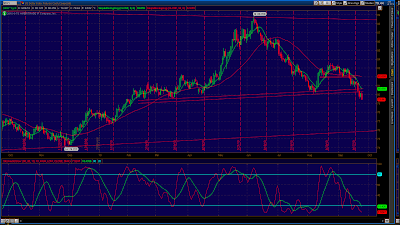 Durable Goods came in at -1.3%, this is down from positive .3 the month before and it is below expectations of -1.0%. However, ex-transportation, new orders rose 2.0% and that is what the bulls are using as today’s excuse to use their POMO money in their HFT machines. Yes aircraft orders are volatile, but it’s about the only thing we can still make in America (and actually very large portions of our aircraft are made overseas with those parts only assembled here in America). When the sale is made, that sales figure in dollars counts as if the whole thing were made here and it is most certainly not. And here’s another news flash, the aircraft manufacturers have greatly overestimated future global demand as demographics, overall rising energy costs, debt saturation, and less purchasing power are dragging potential customers into the abyss. Here’s Econospin:

The reversal in overall orders in August was led down by the transportation component which dropped 10.3 percent, following an 11.6 percent boost in July. Nondefense aircraft plunged a monthly 40.2 percent after surging 69.1 percent the month before. Defense aircraft orders slipped 2.7 percent in August while motor vehicles declined 4.4 percent.

Other components generally posted healthy gains. Primary metals were up 2.4 percent; fabricated metals, up 1.0 percent; machinery, up 3.9 percent; computers & electronics, up 3.8 percent; electrical equipment, up 0.5 percent; and "other," up 0.1 percent.

Business investment in equipment is on a volatile uptrend. Nondefense capital goods orders excluding aircraft in August rebounded 4.1 percent, following a 5.3 percent fall in July. Shipments for this series advanced 1.6 percent in August after edging up 0.1 percent the month before.

Year-on-year, overall new orders for durable goods in August improved to up 11.2 percent from 9.7 percent in July. Excluding transportation, new durables orders came in at up 12.9 percent, compared to 10.6 percent the previous month.

The good news is that today's durables report shows manufacturing gaining strength outside of transportation-and businesses still investing in equipment. On the release, equity futures nudged up but essentially were little changed. But stock futures then gained traction after taking time to digest the numbers.

Once they fully digest this report, they will realize that orders are adding to inventory at exactly the wrong time. Managers who bought into the “recovery” are only going to be met with consumers who still cannot buy and who still do not have nor want more access to the debt pusher’s credit. Buying into an overall negative and worse number than expected is simply dangerous.

New Home Sales data is released at 10 Eastern this morning, last report was a depression print of only 276k, and the consensus is expecting a rise to 290k. That may happen, when you are dealing with numbers that are only a quarter to a third of the prior numbers, a bounce off the bottom a little is not difficult, but that won’t mean the market has turned around. Just as a reminder of where we are in the Option-Arm reset debacle, we are sitting on a peak just prior to a short term valley which will accelerate into early 2012: 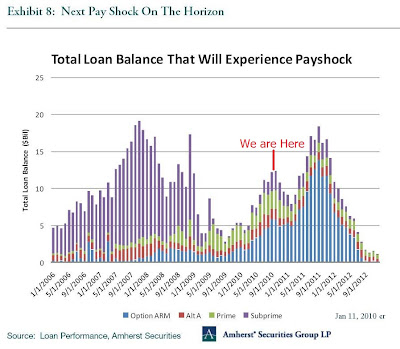 Meanwhile, the NDX is pressing on to new highs as I type. This is the exact same type of rotation trade nonsense that pushed the indices to insane levels just prior to the ’07 top. The momo tech stocks, like Apple, are being used to run a thinner and thinner segment of the market higher. Breadth is narrowing as this occurs, the number of new 52 week highs has been contracting as a sign that few stocks are participating.

Over the past few days, the XLF and the Transports have been relatively weak. The market will not continue to climb without them. Below is a daily chart of the XLF, note that it closed below both the 50 and 200 dma’s. Also note the rising volume on the decline: 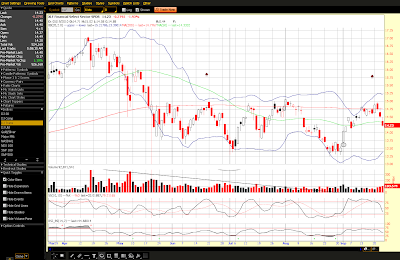 If we go onto make new highs here, it will not change my thinking one iota. The markets are very dangerous, I see a lot of wave C psychology from politicians and the political ads are all slamming incumbents for their support of bailouts and wild spending ways (immoral actions bringing deserved karma payback). Budgets are far from balanced and pressure is mounting to knock off the nonsense. Behind the scenes Bernanke and his private banking bosses are pouring dirty money into the stock market using very unscrupulous manners in so doing. They will lose the battle in the long run, of that I have absolutely no doubt.

Keep in mind that today is Friday and that the now Pavlovian routine is to ramp the markets in advance of the Monday morning ramp.