It’s Monday morning, so the futures are ramped higher reminiscent of Ground Hog Day. Perhaps Bill Murray should be in charge of the SEC. Bonds are higher, the dollar is higher, gold set another all time high, and oil is lower.

I showed the H&S patterns on oil before, but the patterns are progressing, so I thought I’d show them again. There are two patterns in play, the smaller one playing out since May of this year is looking like the right shoulder of the larger one that stretches back to October of last year. The neckline of both are approximately in the $70 to $72 a barrel range. Prices are descending back to the neckline of the small pattern as you can see below: 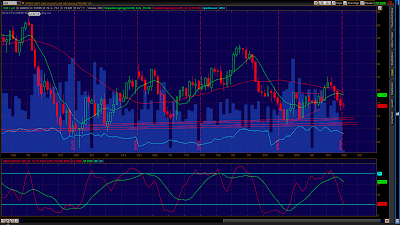 On the longer term chart, you can see that the smaller pattern is the right shoulder of the larger pattern. A break of the $70 neckline would portend an eventual breakdown to about $53ish: 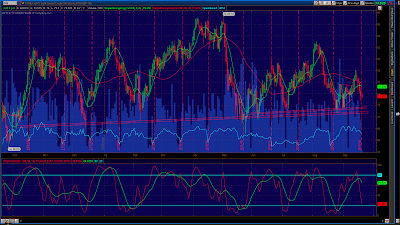 The completely unbiased National Association of Home Builders releases their Housing Market Index at 10 Eastern this morning. Tomorrow is Housing Starts and then the FOMC announcement. Some are expecting some sort of QE2 announcement from the Fed tomorrow, some aren’t. The market may be disappointed if they don’t. I think they are the cause of the distortions and regardless of what they do, in the long run it won’t matter until the debt saturation is resolved one way or the other. The short term is an entirely different matter, so POMOs and low interest rates for everyone (except for you)! New and Existing Home sales data comes later in the week as do the “leading” Indicators.

Moody’s reaffirmed the triple-A rating of the U.K. this morning. The rating agencies are worse than worthless, they actually cause much damage to investors and distortions to the entire financial system. Any future reform MUST include an overhaul of those agencies. Ireland and Portugal are the latest to be experiencing spread stress over their debts. The IMF is trying to get involved with “saving” Ireland by issuing them more debt, LOL. Ireland has a couple of bond issues they must sell this week, what happens there will be widely watched and could move the markets. Of course I’m sure that the central bankers will come up with some way to make up artificial demand for their debt to mask over their problems for longer, we’ll see.

The markets went exactly nowhere last week, failing to get over SPX 1131 overhead resistance. I think that prices may hang out in this area until the FOMC announcement tomorrow, but they should find a direction this week. Once again I want to note the weakness of the financials. They continue to be a drag on the entire market. Note the XLF below is making lower highs and on this run up has failed to penetrate the 200 day moving average: 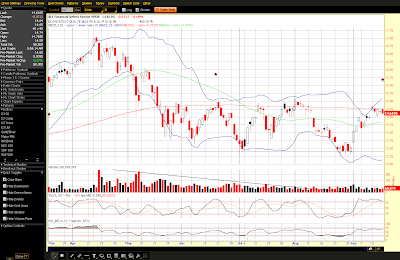 BANK, the Nasdaq bank index, is considerably weaker, nowhere near the past three peaks: 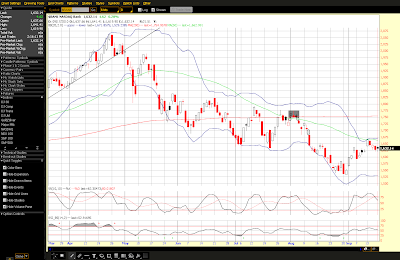 The markets are extremely overbought still, and despite no downward momentum, some of the indices are already producing sell signals on the daily stochastic. Divergences are apparent and growing, and several of the sentiment indicators are at or near record bullishness. In fact, investor sentiment is at levels higher than they were prior to the ’07 top! It should be an interesting week, stay “tuned.”