Equity futures swooned overnight but miraculously recovered with a straight up pump this morning into the green. The dollar is down slightly, bonds continue higher, the Yen is strengthening again, oil is down, and gold has fallen back below $1,300 an ounce.

Today is yet another POMO day. The correlation between POMO days and up days in equities seems to be quite high, and we need to watch that correlation progress. Look, as frustrating as it is, I can guarantee you that it WILL come to an end. Why? It’s simple. Because the PD’s and only a handful of other players have accumulated nearly ALL the stock already! Once they own the entire market, which won’t take long at the rate of $20 billion per week, then what? Then we have 10 or 20 firms trading almost all the stock? How’s that going to work out? It’s not, that’s how – once again our knuckleheaded leadership is getting us into a battle which they do not understand and one for which they have no exit strategy.

Can you say Iraq or Afghanistan? That’s what our stock markets resemble - the same exact type of flawed “thinking,” that is really only just a profit center for a few in disguise. They don’t care as they know it’s just a short term profit opportunity for them, they will leave behind a decimated populace with no effect on their narcissistic conscious whatsoever. I’m telling you that the POMO fueled stock market correlation is going to end, and it’s going to end badly as all attempts to manipulate price always do.

The Case-Schiller Home Price Index came in with a July 10 city seasonally adjust price increase of ZERO.ZERO% – nada. This is down from June’s supposed .3% increase. All the numbers reported were weaker. Keep in mind that this is a trailing report and that closing prices for July were not yet free of influence from our nutty government’s interventions. This summer’s selling season was DECIMATED because they simply pulled forward what little demand there was, and now the traditional selling season is over. In my neck of the woods (Puget Sound area of Washington State) prices are still far above rents and above what average incomes can support. That alone tells me that price correction is not over.

Yesterday Brazil admitted that there is a currency war occurring with countries competing to devalue their money. That’s definitely true. Now there’s also trade wars firing up. We accuse China of undervaluing the Yuan, they retaliated by sticking tariffs on chicken imported from America. Yesterday America responded:

US sets duties on copper pipe from China, Mexico

WASHINGTON, Sept 27 (Reuters) - The United States on Monday set final duties ranging up to 61 percent on hundreds of millions of dollars of copper pipe from China in one of several disputes causing friction between the two countries.

The U.S. Commerce Department announcement came one day after Beijing slapped final duties ranging from 50.3 percent to 105.4 percent on chicken parts from the United States.

Action in both cases came as the House of Representatives is considering a bill this week that would treat China's "undervalued" currency as an export subsidy under U.S. trade law, opening the door for more U.S. duties on Chinese goods.

Trade wars are not going to end well for anyone.

Consumer Confidence will be released at 10 Eastern this morning. These low confidence reports have been largely ignored by the markets so far.

The SPX 1150/1160 area is an import level, and it has held so far. Divergences continue to grow, they are all over the place. Here's a huge one - bonds versus stocks: 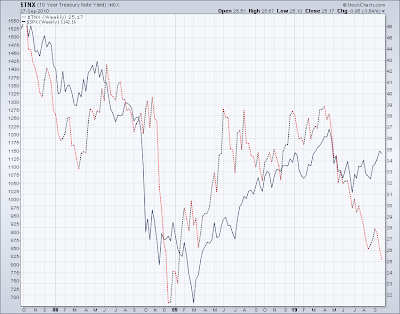 Another BIG red flag appeared yesterday when the McClelland Oscillator closed back below zero. This is one of the prime ingredients to look for when there is a Hindenburg Omen on the clock as there is now. As long as that oscillator remained above zero the odds of large declines was small, but below zero it picks back up dramatically.

The market has been leaving huge gaps in the chart all the way up from the bottom. Gaps get filled. Below is a 30 minute chart of the NDX, there are 5 open gaps just on this latest parabolic ramp, there is yet another even below that. Note the RSI divergence against price here – that divergence is even larger on the 60 minute chart. The longer the time frame of the divergence, the larger the coming correction: 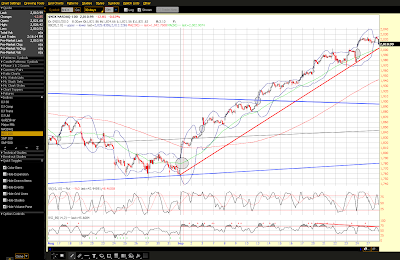 The red line on that chart above is your clue point. The NDX is being fueled by the action on a narrowing number of momentum stocks. Those stocks are showing signs of tiring, and there are fewer of them now participating in the momo rotation. This is the same type of activity seen before at major tops. POMO fueled ramps will work until they don’t.