Equity futures are higher overnight, ramping initially on more trumped up economic reports from China overnight – what both our countries can’t print monetarily, they simply make up. The dollar is diving, the Yen is climbing, bonds are falling, oil is zooming straight up now well above $81 a barrel, and gold is again setting new highs just below $1,320 an ounce.

Oil zooming above the $80 mark is an economic show stopper for the U.S. Every jaunt above that mark has caused severe economic damage. Yet, because our government is pumping momo POMO, the hot money rotation has decided it’s time to leave soft agricultural products and move into oil. Watch, our government will blame the oil industry and the “speculators,” the very people who they are fueling.

It’s a good thing that personal incomes rose in August by .5% then, right? July rose .3% (oops revised lower to .2%), and this was above the .3% repeating monkey consensus. Here’s Econopay:

Highlights
Despite sluggish job growth, the combination of modest growth in average hourly earnings, private employment, and steady or firming weekly hours is gradually boosting wages and salaries-at least in the private sector. Personal income in August advanced a healthy 0.5 percent gain, following a 0.2 percent rise the month before. The latest number for personal income topped the market forecast for a 0.3 percent gain. Unfortunately, a notable part of the latest increase came from a jump in government unemployment benefits. Still, there was moderate strength in wages & salaries component which posted a 0.3 percent boost after increasing 0.4 percent in July. Private industry wages & salaries rose a sharp 0.5 percent, matching the July gain.

PCE inflation was a little higher than usual at the headline level but still quite subdued at the core. The PCE price index rose 0.2 percent in both August and July. The core rate firmed 0.1 percent in each of the last four months. The market had called for a 0.1 percent uptick for August.

Wow, so the hyper-inflationists were right!? The one missing link for sustainable price increases is income, and here it is…

Oh, wait, did you catch why it jumped? This is according to Bloomberg, “Incomes were up 0.5 percent, the biggest advance this year, propelled by the resumption of extended and emergency unemployment benefits.”

Niiice. Here’s the thing – government deficit spending only adds to the DEBT which is a drag on the economy. Is it sustainable? Don’t think so.

Not mentioned by Econospin is the fact that year over year consumer spending is decelerating from 3.4% to 2.7% in just one month. Gee, I guess the unemployed don’t really have that much to spend, who could have guessed? But the good news is that at least they’re not out rioting in the streets like they are in Europe and now Ecuador! Right? I mean, sure, they will be paying more at the pump and the dollar has lost nearly 6% of its purchasing power in the last month, but their spending is up a whopping 2.7% over the last year based largely on unemployment checks, so it must be a time to buy stocks, right? Like I said, it’s both a comedy and a tragedy.

Motor vehicle sales are released throughout the day, Consumer Sentiment comes at 9:55 Eastern, the Manufacturing ISM at 10 Eastern, and Construction Spending will also come at 10 this morning.

Yes, this September was the best since 1939 all the media shouts! Yet they fail to tell you what occurred just following that… WWII immediately began and the markets swooned for 4 more years, that’s all. And before you think that events like that won’t happen this time, I will remind you that the type of volatility we are seeing now is most definitely NOT normal! The largest gains and losses occur when volatility is high. These times historically see overall FALLING prices, not rising prices! If you don’t believe that’s true, just pull up a chart showing the last 11 years in the NASDAQ, or draw a line from where the SPX was in 2007 to now. Alternatively you can look at the SPX and go back in time to the first time we were at this level, the year was 1998. So now we get to see how volatile this October will be. It’ll be interesting one way or the other.

Yesterday’s up/down action produced yet another small movement in the McClelland Oscillator. Again, we can expect a large price move either today or tomorrow. The McClelland is still positive, but barely.

All the major indices produced Key Reversal candlesticks yesterday by running to new highs and closing below the prior day’s lows. This is a marker that should not be ignored, it greatly raises the odds of a significant decline. You can see that candle on the DOW, and it came on much higher volume: 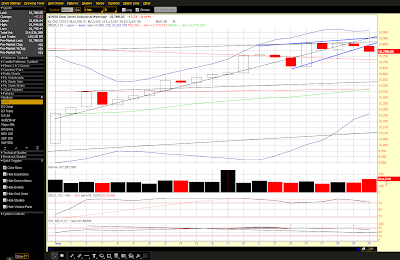 The VIX jumped higher yesterday, closing above both the 200 and 50 day moving averages. It was above the upper daily Bollinger band for a time, but closed beneath it, thus avoiding the set up for a market buy signal. Note how price is climbing the wick of that inverted hammer from two days ago. The Bollinger bands are pinched, that means that a large movement is likely to follow. Also note that it's been awhile since we got the VIX market sell signal, and since that time we ran from being beneath the lower bollinger to tagging the upper bollinger yesterday! While that was occuring the price of equities continued to rise - that is a MAJOR divergence: 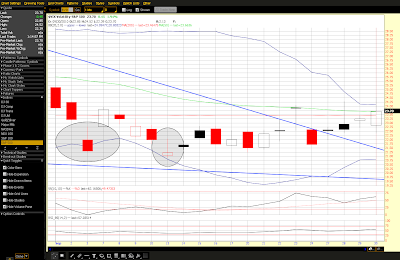 BANK produced a potential shooting star right on the 50dma, we need to watch today’s action to see if prices close today below yesterday’s low (the XLF closed below its 50dma): 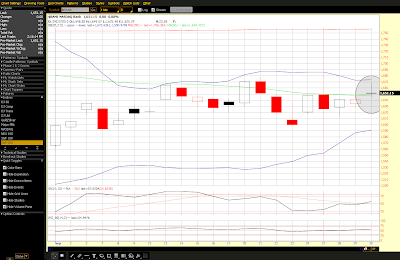 The down move yesterday did leave a little gap up to about 1149. That is the same place as a 61.8% retrace of the down move and it looks like we’re moving to fill that gap at today’s open. You can see 5 clear waves down from yesterday’s high, that makes it a potential subwave 1 down and the bounce since wave 2. Again, we’ll see… 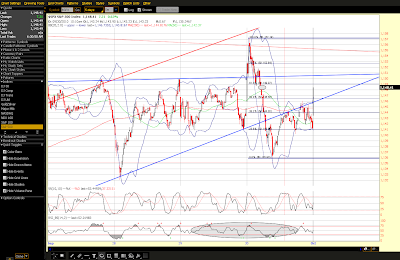 Here’s a tune that goes out to all the narcissistic fraud producing central bankers the world over… enjoy!