Equities are lower this morning with the dollar up, bonds down significantly more, and both oil and gold down.

So, here we are less than a week away from elections that will take away Obama’s magic shield of overwhelming Congressional power, and the whole world is expecting QE 2 to the tune of $100 billion per month! $100 billion per month! And what has got to worry the bejeezus out of the oligarchs is the fact that bonds are sliding hard in price sending interest rates for their “assets” (debt) up! The breakdown of the long bond is quite disturbing if you understand that the goal of QE is to keep it moving in the opposite direction: 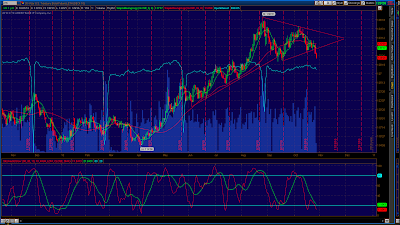 A breakdown below support at the 129 level on that chart will signify further breakdown. Yes, bonds are in a bubble, and it is massive. Just think about all the people, now deathly and appropriately afraid of stocks who have rushed into bonds… perfect timing, just in time for them to buy into what will prove to be the last bubble. They got suckered into stocks, then into buying multiple homes, and now bonds.

And what’s so frightening at this juncture is that the likes of Bernanke believes that they can keep rates low via money creation! The truth is the exact opposite! The more they QE, the HIGHER rates will eventually go! There is no fooling the math of debt, ALL debts get repaid with interest in one way or the other. Attempting to fool the math will only lead to either higher rates or to a falling value of our currency. Failing to recognize and respect this fact will lead only to larger and larger attempts to stop it.

Of course assuming that they (the oligarchs) don’t recognize what’s occurring is simply naïve. The people of this country must realize that they are being DELIBERATELY robbed of their futures, and when they do then hopefully they can work to unseat the illegitimate oligarchic organizations of the globe, namely the “Fed,” IMF, BIS, CFR, and even the subordinate organizations like the United Nations whose existence is a good idea in concept, but in practice they have been bought off and controlled by the people inside the global money changing cartel.

That’s a critically important to paragraph to understand. It is these people who are butchering the rule of law, and it is up to the people to reinstate the rule of law. Step one in doing so is to prosecute their crimes and to throw those responsible in prison. THEN we can get on with the business of reestablishing a money system that works, and we can work to fairly and equitably resolve the debt saturation problem those debt pushing fraudsters created.

Other than that I have no strong opinions!

The morally bankrupt, hypocritical, and corrupt Mortgage Banker’s Association released their worthless and intentionally deceiving Purchase Applications for the prior week – here’s Econoday:

Highlights
The volume of purchase applications picked up after two weeks of steep declines, 3.9 percent higher in the October 22 week. Refinancing applications rose 3.0 percent. The gains coincide with a drop in mortgage rates including a nine basis point decline for 30-year loans to 4.25 percent. This week's heavy run of housing data indicates the sector is stabilizing at a very low level.

Stabilizing? What nonsense. And what a worthless set of data, the MBA refuses to give out hard numbers of anything. That’s simply because they want to deceive and spin their web of lies by only using weekly percentages – it’s a simple game that attempts to fool the weak minded.

Durable Goods orders increased a large 3.3% in the past month – this is well above last month’s -1.3% decline, and it is more than the +1.6% consensus. However, the increase was almost entirely based upon aircraft orders, and with those removed, Durable Goods orders actually fell .8%.

Business investment in equipment continues to oscillate between positives and negatives due to its inherent monthly volatility and only moderate uptrend. Nondefense capital goods orders excluding aircraft in September slipped 0.6 percent after jumping 4.8 percent in August. Shipments for this series continued to edge up, rising 0.4 percent in September after gaining 1.3 percent the prior month.

Year-on-year, overall new orders for durable goods in September held steady at up 12.2 percent. Excluding transportation, new durables orders eased to up 9.5 percent from 13.6 percent the prior month.

The bottom line is that durables excluding transportation have been typically volatile but essentially flat over the last few months. Growth in manufacturing appears to be slowing at least for the near term. On the news, equity futures declined marginally while Treasury rates were little changed.

With my experience in the Airline industry, I can tell you that airlines are notoriously bad at timing aircraft orders. In fact, they generally buy exactly when they shouldn’t be, and are not buying exactly when they should be. Of course this is because they are victims of the credit cycle created by the mobsters who run our nation. And the lead times necessary in the order process set up a P.I.O. (pilot induced oscillation) that puts them out of synch with the real economy. In other words, their passenger loads are high right now, and so they are ordering again, but that is likely to change before they actually take delivery of the aircraft they are ordering now.

And what do airliners depend upon? Oil of course! And thus I thought this little tidbit this morning was very interesting for those who understand the concept of peak oil:

The U.S. Geological Survey says a revised estimate for the amount of conventional, undiscovered oil in the National Petroleum Reserve in Alaska is a fraction of a previous estimate.

The group estimates about 896 million barrels of such oil are in the reserve, about 90 percent less than a 2002 estimate of 10.6 billion barrels.

The new estimate is mainly due to the incorporation of new data from recent exploration drilling revealing gas occurrence rather than oil in much of the area, the geological survey said.

My oh my – that’s a game changer if it’s true and not just disinformation. Hard to know in today’s world as every release must not be taken at face value. What agenda and motivation does the Geological Survey have in generating this release, and what political influence are they under? That I don’t know, but this would throw a large wrinkle at those who think Alaska is going to make the U.S. anywhere close to energy independent anytime soon.

New Home Sales are released at 10 Eastern this morning.

Yet another gap on the open today. No POMO today, but there will be tomorrow and then again this coming Monday.

Yesterday the market produced a hammer and wound up essentially where it started. This again “coils the spring” in anticipation of a large directional move. Again the McClellan (spelled correctly this time) Oscillator turned negative. The prior day’s shooting star/ gravestone doji contrasts with yesterday’s hammer to produce what I call “dueling hammers.” Dueling hammers are almost always resolved with prices moving in the direction of the handle of the most recent hammer – in this case that would be down, and that’s what the opening is producing. Regardless, these are all topping candlesticks, of which there have been many. The technical divergences are roaring about a top! And yet here we are, simply going nowhere while we await our executioner – what will it be? Death by a hundred billion per month, or should we just blast our own brains out with a couple of trillion right up front? Personally, I would prefer to die quickly than to be tortured to death by the likes of Fedspeak and the trickle of poison that the debt pushers prefer.