Equity futures are down this morning following more ramping overnight. The dollar fell to a low of 77.57 and then bounced, bonds are sharply higher, oil is reaching higher, and gold touched $1,351 an ounce.

The Yen fell down to and perfectly touched its lower trendline of its large descending wedge. This touch produced a new lower low that follows trillions worth of yen intervention. The IMF came out and warned about the dangers of currency wars stating that it can do long term damage and hinder any recovery – no kidding? 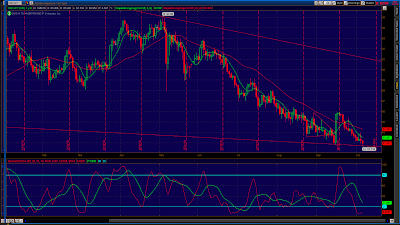 And yet we continue to make money from nothing and hand it over to the banks buying up their worthless debt “assets.” They then take that money and run up equities, commodities, and bonds, taking short term profits for themselves and leaving the debts behind for everybody else. Not only are they leaving the debts behind, but they are destroying the value of the dollar, thus robbing the people every time they make a purchase with dollars they are forced to earn, unlike the banksters who have created their own laws.

The still worthless MBA Purchase Index rose an unbelievable (as in I don’t believe it) 9.3% in the week prior. The Refinance index fell 2.5%, and because refinancing far outweighs purchases, the total index sank another .2%. Here’s Econoday:

Highlights
In the latest sign that housing is moving up from its post-stimulus hole, mortgage applications for home purchases rose 9.3 percent in the October 1 week. The jump was fed by a 17.2 percent increase in Federal Housing Administration (FHA) applications. The report notes the jump precedes an October 4 deadline after which the FHA now requires higher credit scores and higher down payments. Yet in a sign of overall strength, conventional purchase applications rose 3.6 percent in the week.

Refinancing applications slipped 2.5 percent in the week to make for a 0.2 percent dip in MBA's composite index. The average 30-year mortgage decreased 13 basis points to 4.25 percent for a record low in the survey.

Record low rates, and purchases are up due to FHA tightening. Making it more difficult to get loans doesn’t sound like never ending growth to me, it sounds like ending growth. Note how the bankers get POMO infusion after bailout, after bailout, but the people are losing their access. Those buying into the mantra that the economy doesn’t matter to the stock market are about to get a big surprise. The consumer who now is forced to pay more for their gasoline, their food, and who is losing access to credit comprise 70% of the economy. The disconnects between economic reality and the stock market are HUGE. By many measurements they are larger than they were at the ’07 top. At that time people were saying the same exact thing, “Don’t fight the Fed.” Just look at how that worked. Interest rates went to zero and despite that the markets crashed. Just look at the state of housing now compared to then. Look at the stock market now compared to then. Don’t fight the Fed my rear. They are the problem, they have failed and are going to continue to fail, and the stock market is a massively overvalued disaster just awaiting a triggering event.

Let’s talk about employment starting with the Challenger Job-Cut Report… Mass announced layoff jumped 6.8% in September from 34,768 to 37,151. Here’s Econoday:

Highlights
Layoff intentions totaled 37,151 in September, down from 34,768 in August. Government layoffs were up while layoffs in the retail and industrial-goods sectors were down. Hiring intentions for the retail sector soared to 114,000 in September in a staggering jump from a year ago when retail hiring didn't even total 2,000. Challenger's numbers can be bumpy and are a difficult gauge for Friday's employment report. The report itself notes that a low number of job cuts doesn't necessarily translate into increased hiring.

Again, the government is laying off people because they can’t find the money for that, but it’s amazing how they came up with $5.2 Billion just yesterday to pump up the stock market! Insanity comes to mind, but so does the term greed. I don’t know when the people are going to wake up, but if they ever do it’s going to be rightfully ugly. Hiring intentions sound nice, but then again so does buying inventory that winds up sitting on the shelf.

The ADP Employment Report, which I give very little credence, says that Private Payrolls in September fell from Augusts’ -10,000 to -39,000. Oh my, that’s not at all what the “consensus” was expecting. I think this Friday’s Employment Report is going to disappoint, again we have a minimum month for the Birth/Death model and we have temporary government jobs going away. No, that won’t be a good thing because it spurs QE2, just look at the dollar and at the price of oil if you need a reality check.

According to McHugh, nearly half of yesterday’s rise was short covering. Yet another huge gap was produced. It’s not real, it’s not going to last. That POMO money is going to disintegrate and we’re all simply left holding the empty bag in the end.

Watch the currencies and bonds today. Today is the last scheduled POMO day too, we'll have to see how large today's infusion is. The TNX is close to confirming that new H&S pattern, and the dollar is not that far away from its potential support in the 76ish area. Should the Yen break that lower trendline, that could produce a real firestorm.