After being down sharply, equity futures have of course recovered to about even in the premarket on this HFT controlled POMO fueled Monday morning. The dollar is higher, bonds are higher, oil is higher, and gold is lower.

Citigroup – as messed up as that company is – managed to “earn” $2.17 billion in past quarter, thus magically beating estimates. This was accomplished in large part “as the company reduced loan-loss reserves by $1.99 billion.” They say the reduced loan-loss provisions are due to “improving credit conditions.” LOL, I’d like to know which improvement they are referring to, because frankly that’s just an outright lie. Once again it’s all in the accounting and we have no idea what their models are marking to what fantasy. The government doesn’t care, they just look the other way as long as there’s no crisis TODAY.

Of course the banks work hard to PLANT stories like this one on CNN:

Housing mess: You can't stay if you don't pay

NEW YORK (CNNMoney.com) -- Just because a lender screwed up your foreclosure paperwork doesn't mean that you get to stay in your house for free.

Of course, plenty of enterprising lawyers will try to tell distraught homeowners otherwise.

But the best that most delinquent borrowers can hope for is that the current flap over foreclosure documents will prompt financial institutions to grant more affordable loan modifications, experts said.

Even if the banks didn't have the paperwork required to foreclose, "that doesn't mean you'll get a free house at the end of the day," said Ira Rheingold, head of the National Association of Consumer Advocates. "There is no panacea here."

… Meanwhile, lots of lawyers are trying to capitalize on the confusion by promoting their foreclosure rescue services to troubled borrowers. But homeowners should beware of scams, Rheingold said, because if you can't make your payments, they ultimately can't help you.

Now why do you suppose a story like this would get planted in a mainstream media source? Of course it’s because they want to try to scare people into keeping up their payments, they don’t want a mass exodus of debt slaves. It’s all just a paperwork problem according to articles like this, it’s not that big of a deal, it’ll all get worked out… This type of thing is exactly how the few individuals who control the production of our money use the media in an attempt to control our minds through THEIR media outlets. If you aren’t a debt pusher, you are not a part of their club.

Treasury International Capital flows for August came in positive for the second month in a row at $38.9 Billion. This compares to July’s net inflow of a supposed $63.3 Billion. I have to say that with our $40 billion monthly deficits and bond auctions that are sucking the life out of the planet, that there is definitely some creative accounting going on over at the Treasury department. Foreign purchases of $128.7 Billion? “Net foreign acquisition of long-term securities, taking into account adjustments, is estimated to have been $111.8 Billion.” Hmmm… I’ll have to dig deeper and report back on this one, but in the meantime the report is here:

Industrial Production for September fell by .2% following Augusts’ rise of .2%. The consensus was looking for an additional .2% rise. Here’s Econohope:

Highlights
Industrial production was disappointing in September, declining 0.2 percent, following a 0.2 percent gain in August. The September decrease came in notably below analysts' median projection for a 0.2 percent advance.

Capacity utilization edged lower to 74.7 percent from 74.8 percent in August. Analysts had expected 74.8 percent for the latest month.

The latest production numbers show manufacturing to be on the weak side. However, that may be temporary as a weaker dollar will likely boost exports. Also, the latest Empire State manufacturing survey for October was notably more positive. And durable goods orders excluding transportation picked up recently.

Falling production, falling capacity utilization. Not to worry as trashing the dollar will supposedly make it all better (as measured in dollars that are worth less). No, sorry, but killing the dollar will accomplish nothing other than to completely sink America’s workers into the abyss.

Which brings us to QE2 or QE100, whatever… this is an economy destroying move. The larger the QE, the faster and harder the economy will fall. Each effort to print money will simply make living that much harder for people whose incomes cannot rise. This will torpedo corporate earnings for all companies other than the financials partaking in the fraud. Now, should they QE and use it to help eliminate the people’s debts, THEN you would have something that moves the economy forward. But when is that going to happen? Never of course, the narcissists are still in control… for now, but their actions are eventually going to lead to their ouster.

The Housing Market Index is released at 10 Eastern this morning. While this release probably won’t show much further deterioration from the already disastrous housing market, I am very concerned that foreclosuregate could easily cause very large future deterioration in home sales, both due to falling foreclosure sales, but also due to concern over purchasing a home with a potentially defective title. It certainly won’t help.

And foreclosuregate certainly won’t help the banks. Investors who have been burned by the fraud produced by the banks are already getting more aggressive in their stance and are taking legal action against the banks. Of course the banks are not going to be able to make investors whole in the end, so this absolutely has the potential to derail the flow of credit. Just take a look at bank stocks and how they performed at the end of last week. The XLF is a huge drag on the market, and the only upside momentum left is in basically three momo tech stocks. But Apple and Google do not an economy or stock market make, and a very narrow based advance can most certainly not sustain overall rising prices forever.

The dollar appears to have found support right at the 76 level I had been showing and forecasting. The Euro also appears to have begun correcting its rise, but the Yen continues to strengthen for now. This could be short lived, but what happens with the currencies will most definitely influence the markets in the short run.

On Friday the McClelland Oscillator turned negative again, when this is negative, it does set up the potential for further downside momentum. Of course these real negative forces are being fought tooth and nail by fake forces like POMOs and currency interventions. Those interventions cannot be the basis of a market for long and I fail to see an exit strategy here. That means that they attempt and attempt until they just flat out fail. This is exactly what happened/ is happening in Japan.

I was looking at the long term charts again this weekend and want to note something that I think is quite significant. Most people never look at the YEARLY charts (each candle is one year), but when you look at both the DOW and SPX you see a massive negative RSI divergence. On the DOW, for example, we are almost to the height of the left shoulder around the year 1999, and yet the RSI is far below where it was at that peak. 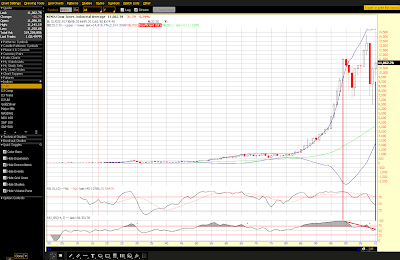 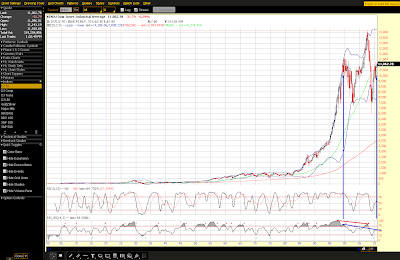 The same divergence can be seen on the quarterly charts as well and the SPX was also divergent on the 2007 peak and that has still not been resolved. These divergences are a huge problem for those who believe the markets are going to move significantly higher. The fact remains that the biggest credit bubble in history is collapsing. It takes long time frames to resolve them, and this one most certainly has not been resolved.

In the meantime the Monday morning ramp continues its “win” streak, grinding out phony profits for the banks who own the HFT machines, they own the exchanges, they buy their own accounting rules, and they tell you that black is white via their media outlets. Oh yeah, Osama is living in a house in Pakistan and al-Zawahiri is his neighbor – queue up the bank’s military industrial complex!