The dollar is currently in the 77 vicinity, getting close to the 76 interim target rising trendline. Below is a chart of the dollar daily on the left and Euro on the right: 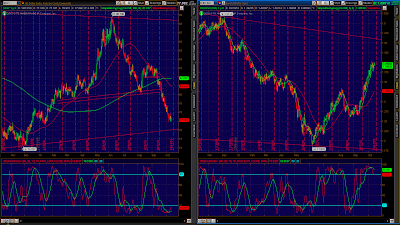 The falling dollar is a real problem for our economy. Most “economists” will tell you that it’s good for exports and it helps make debt easier to repay. While it may help a minority of corporations who do business overseas, it most certainly does not make debt easier to repay when wages are still arbitraged by overseas workers as that forces wages down here not up. In fact wages have been falling not rising. Now couple falling wages with higher energy costs and food costs and you have just killed off your consumer based economy.

Again, the actions that are transpiring for our economy are 180 degrees from what should be happening. There is a reason for this – here it is again for those who can handle the truth. The “Fed” is the private banks. They make their decisions based upon the best interest of the banks who have created a debt money system for themselves that benefits them and requires never ending growth. Supposed modern day “economists” are trained in schools funded by these criminals and they are taught things that have no basis in a debt money economy or that are just patently false. Throw in tons of obscuration and you have an economy based completely on financial engineering instead of real engineering.

Here’s proof of how much of an influence financial engineering is to our economy… Below is a chart of Nonfinancial Corporate Profits after tax thru quarter 2. Note that we are getting back close to all-time high corporate profits following a parabolic rise and subsequent collapse: 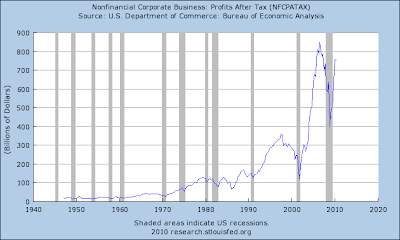 Below is total Corporate Profits after tax, this chart includes financial companies again through the second quarter. Note the new all-time high. I also annotated the accounting methods allowed by FASB rules... During the parabola financial engineering was exploding and mark-to-model was allowed. Along came mark-to-market accounting rules and corporate profits collapsed as did the entire stock market. Under threat from the banks and from Congress FASB was forced to reinstate mark-to-fantasy rules and you can clearly see the results. 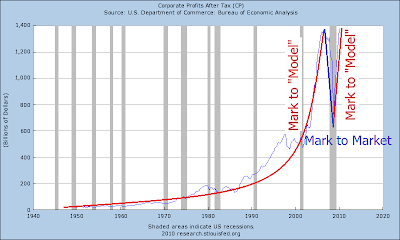 Based on the above chart alone, it would seem foolish to bet against this criminal activity. However, here’s the story… Mark-to-model is simply an accounting trick that allows companies to assume that they will be repaid for all their worthless debts at this point in time regardless of what real future cash income may be. This mark-to-model is a PONZI scheme because those future cash flows will only be there if they are able to keep never ending growth never ending. This will not happen! Because consumers are already saturated with debt, their homes are underwater, they cannot repay all the debt. Plus we know that much of these financially engineered products are simply out and out fraud with no real cash flows behind them. Thus eventually this scheme is exposed for what it is – FRAUD.

But in the mean time companies like JPM, who remember IS THE “FED,” continue to make record profits and pay themselves record bonuses as they rob from the American people and mark their bogus “assets” to their own created fantasy prices. Keep in mind that these are the same companies that own the stock exchanges, they own the HFT machines, and thus they operate a network in which they are in full control. In fact they have created a real life “Matrix” in which their activities draw upon the blood of the people while in turn they feed the people’s minds with complete fantasy. The media is fantasy, the markets are fantasy, corporate “profits” are fantasy, and our political system is also a fantasy.

And nothing says fantasy more than this morning’s earnings report from JPMorgan:

NEW YORK (CNNMoney.com) -- JPMorgan Chase said it earned $4.4 billion during the third quarter on Wednesday, an increase of 23% from a year ago, as loan loss reserves continued to decline.

The first of the nation's big banks to report results, JPMorgan (JPM, Fortune 500) said it earned $1.01 per share. Analysts polled by Thomson Reuters were expecting the New York City-based bank to earn 90 cents a share during the three-month period ended September 30.

The provision for credit losses, the funds set aside for the allowance of bad loans, was reduced to was $3.2 billion, down 67% from a year ago.

"We are pleased to report a continued overall decline in credit costs, although our mortgage and credit card portfolios continued to bear very high net charge-offs," said chief executive Jamie Dimon in a statement.

$4.4 BILLION dollars in one quarter! “Loan loss reserves continued to decline!” You couldn’t make that up if you tried. Foreclosures are zooming, bankruptcies are zooming, defaults are zooming, and a huge crisis of confidence in the very structure of our loan system is underway and yet they have the nads to lower their loan loss reserves! And the fantasy continues as the criminals continue to rob America blind. Like all who get what is truly coming to them, there is absolutely no doubt in my mind that those committing this fraud will eventually have karma catch up to them. I wish Mr. Dimon many sleepless nights, if the American people ever figure out how they are being fleeced hopefully those sleepless nights will occur on the inside of a jail cell.

And least you think that the current “foreclosuregate” is simply a paperwork error, I invite you to listen to the following interview and pay particular attention to what is being said here:

"The banks would have to buy them back…" “We’re back to where we were two years ago…” Another TARP? “Not in this lifetime!” My, but that sounds like an attitude shift doesn’t it? Those who think another round of TARP to bail them out should pay attention to how and what he is saying.

Of course he’s 100% right! NOTHING has been solved NOTHING. The problems that created the crash of ’08 are still there, the only thing that changed was the FASB accounting rules! And that’s how it was sweped temporarily under the rug. Again, this fails when either the rules are changed to reality or it fails simply when it’s finally recognized that the cash to service these models simply isn’t coming like they say it is.

This morning the hypocritical MBA issued its weekly worthless and completely not believable Purchase Index for the prior week. The Purchase portion of the index supposedly fell 8.5%, but the Refinance index jumped… get this… no really… wait for it… 21.0% in the week! In just one week! LOL, do you believe that? Har, har, how gullible do they think we are? Oh, that’s right… this gullible:

Import and Export Prices were reported this morning with export prices rising .6% and import prices falling .3% for the month of September. Hmmm… this was during a time that the dollar was falling and oil prices rose… and yet, here’s Econoday spinning reality into a relativistic economic time warp:

Import prices fell 0.3 percent in September skewed by a 3.1 percent temporary downswing in petroleum prices. Excluding fuels, import prices rose 0.3 percent for a second straight month. Prices for petroleum-based products, including natural gas, all show wide declines though a reversal is in store given this month's $10 jump to $80 oil. Prices of imported finished goods show very little change, up 0.1 percent for consumer goods for a second straight month, small increases that don't offset 0.2 percent declines in the prior two months. Prices for imported capital goods are unchanged. Year-on-year, total import prices are up 3.5 percent with ex-fuel up 2.6 percent.

Export prices rose 0.6 percent for a second straight sizable gain that once again reflects pricing power for agricultural products which rose 2.4 percent on top of August's 4.1 percent gain. The plus 12.1 percent year-on-year rate for agricultural export prices is the highest in two years. Finished goods prices on the export side are mixed with capital goods unchanged but consumer goods excluding autos showing a 1.0 percent jump.

Import prices were tame in September but rising oil prices together with this month's weakness in the dollar point to upward pressure for October. For tomorrow's producer price and Friday's consumer price reports for September, today's report points to mild readings.

Hmmm… “3.1 percent temporary downswing in petroleum prices.” My chart shows oil in the month of September going from $71.50 to $80 a barrel. No, that “reversal” in prices definitely occurred in September. This month oil has gone from $80 to $83, so once again it just throws all of this data into question as far as I’m concerned, I do not know how they get falling oil prices from the month of September.

Keep in mind that exports and imports are measured in DOLLARS, not in actual goods. This is a false measurement, as inflation makes it appear that trade is growing when in fact all that is growing is financial engineering.

Yesterday the McClelland Oscillator had another small change which means the large price move expected could occur today or tomorrow. The McClelland is still positive, this is definitely something to pay attention to as meaningful declines likely won’t happen until this swings negative (which won’t take too much at this point as it is weakening against rising prices – yet another divergence).

The VIX closed still under the lower Bollinger band yesterday. That means the sell signal simply waits for the time that it closes back above it: 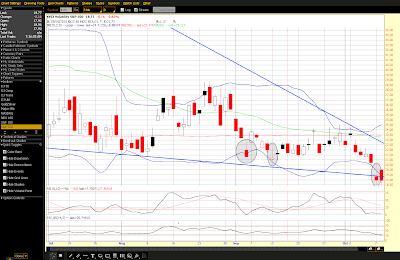 What appears to be a meaningful indicator regarding the volatility indices hit an extreme yesterday, that is the VIX to VXV ratio (ht Scott again). The VXV is the NDX volatility index. As you can see on the chart below low points in this ratio tend to correlate very well with peaks in the equity markets. This ratio hit an all-time low yesterday. I would speculate that the reason this works is that the NDX tends to lead the rest of the market and when its volatility index hits an extreme versus the rest of the market it tends to mark turning points. This is an indicator I haven’t followed over time, so let’s watch it and see how it behaves: 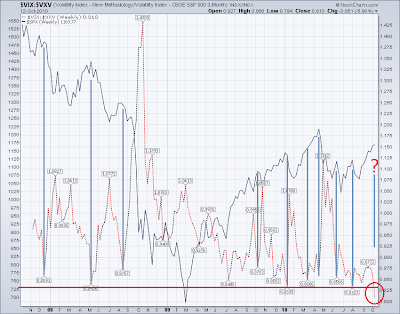 Meanwhile the market presses higher on trumped up earnings from JPM. This is producing an overthrow of a rising wedge as can be seen in this 30 minute chart – note the divergent RSI versus rising price: 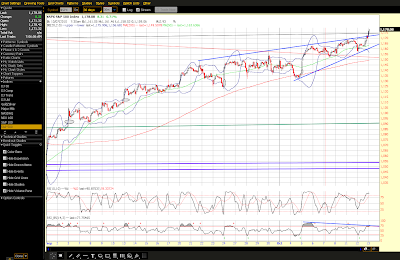 The fantasy continues for now. The higher the market goes the more the fantasy draws in the people who don’t see it for what it is. While the deception can and may continue for quite some time, buying into it is exactly the same as buying Enron stock early in the year 2000…