Equity futures are higher this POMO day, with the dollar slightly lower, bonds dropping like a stone in price, oil stubbornly higher and above $80 a barrel still, and gold is down further in its correction.

There is no significant release of economic data today, just a significant release of the people’s dollars to the banking criminals in exchange for their fraudulent “assets.” Next week’s big data release will be massaged attempt #1 in attempting to convince you that a rapidly deflating economy is actually growing – in other words Q3 GDP. Only when measured in dollars – same goes for the stock market.

The long bond’s price action looks very bearish. However, there is a large triangle that may have formed, and if so we are near support on that now. I’m watching this lower trendline to see if it holds or if it breaks: 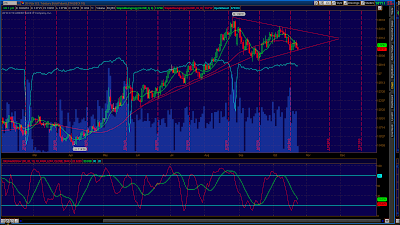 There was a small move in the McClelland Oscillator yesterday (it’s still negative) which means we can expect a large price move in equities either today or tomorrow.

Yesterday there was yet another flash crash in the markets, only this time it was up which makes it a flash smash. Of course when prices flash to the downside they immediately step in and reverse the trades – not so when prices flash up, here’s a snippet from ZH on what happened:

Today's flash smash comes courtesy of microcap company LiveDeal (Nasdaq: LIVE, market cap around $3 MM) where thanks to a rogue (presumably - there are no news in the name) algorithm the stock shoots up from an opening price of $4.79 all that way to $22.25 in about one minute: a gain of 365%, which is too rich even for KKR's new prop group. And no, this is not a fat finger as the QR screen below shows: the algo was busted enough to lift every single offer in a row - there were virtually no downticks for the span of over 15 seconds. The result: 1,679 shorts end up with an almost 400% loss (one of the benefits of unlimited downside shorting). And as the stock has very little liquidity it is very likely that assorted brokers took matters into their own hands and force covered all those who were underwater and losing substantially. And the cherry on top: not a single trade has been busted. In other words, exchanges are more than happy to unwind trades immediately when an algo loses money, but when an algo creates thousands of forced buy ins and retail investors are left with huge losses, then no luck on the DK. What is scariest is that HFT has now gone microcap: with Apple, Amazon, BofA and Netflix bled dry, it is about time the robotic scalping crew found new pastures.

In other words, what’s happening is that the crooks are manipulating the price of the stock, plain and simple. They belong in jail, but they are obviously above the law. Thus the breakdown of the rule of law is again on public display, yet another blow to confidence in the “market.” Again, it’s not a market, it’s a simulation designed to separate you from your money.

Meanwhile the politicians act as if they are helpless. Still no adults to be seen…

Foreclosuregate is the real deal, make no mistake. It is simply another way of uncovering the true nature of the banks health, a continuation of the cancer that is metastasizing. There are severe moves directly ahead. When the banks are threatened, they will lash out. They will get their way or they will take the markets and the economy down – the direct result of the failure of the people to maintain control over their own money system. There is simply NO WAY to fix and to repair all the damage done to the property ownership trail. Thus there is going to be a push of some type to blanket cover it all up. My best guess would be that the criminals push the government to directly refinance as many mortgages as possible with the government guaranteeing title. This, of course, will simply be another crime against the people, but it will be spun and cloaked in the mask of lower interest rates and the hapless public will gladly go along for the lower monthly payment, debt saturated, bankrupt nation ride. Hell yeah, I want my 2% loan and I want it now!

As I look at the price action yesterday and at the candlesticks of the past two weeks, all I see is a market that is in the same exact position as it was prior to the May flash crash. Every candlestick looks like a top. Every attempt for prices to decline is met with some new scheme – some “Fed” lackey flaps his or her gums, a POMO comes in to provide billions to the criminals, the data comes in massaged, something, anything as long as the market doesn’t do its job of true price discovery. CLINK! Goes the can. Call me your “educated eggdicator.” I simply await the inevitable.