5.18pm: The results are in from Greece, and the new unity government has received an overwhelming vote of confidence.

Of the 293 deputies who cast ballots, 255 MPs endorsed the motion while 38 rejected it.

5.55pm: Lucas Papademos's victory in the vote of confidence in the Greek parliament rounds off a decent day for Europe's new technocratic governments (with Mario Monti sworn in as Italy's new PM this afternoon).

The Bloomberg link to Greek 1-year bonds shows the pertinent information even if their chart does not. A 1-year bond yield approaching 300% is decidedly not a vote of confidence. 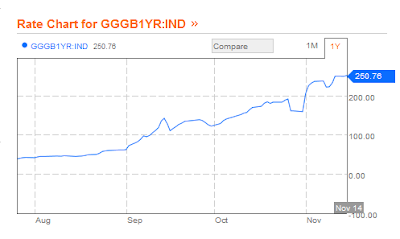 As an aside, I need to find a new source for European sovereign debt charts.

Bloomberg replaced their previously nice looking chart system with a new interactive map that does not look nice and is still out of date.


The Bloomberg charts are better than nothing, and they are free, but they are also sloppy and nowhere near as good as the previous chart format that accurately showed the day's action in a visually pleasing manner, even though the corresponding chart was incorrect.

The interactive map is a nice option, but does nothing for a point in time clip, especially if the chart is not even accurate.