Equity futures are lower this morning with the dollar higher, bonds higher, oil zooming after breaking the $100 mark, gold & silver are lower inside of their recent ranges, and food commodities are slightly lower also still stuck in their ranges.

As you can see, equity prices are still in the middle of that symmetrical triangle. Symmetrical triangles are usually, but not always, continuation patterns. This one was entered from below, so in the technical analysis world you would expect it to break higher: 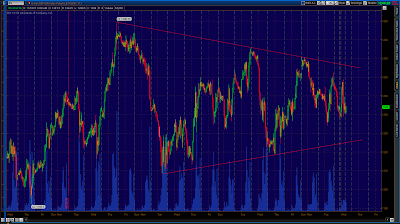 Italy has named their new President – Mario Monti. He calls himself an economist and not only is appointed President, but also the Finance Minister. One of the clients he has “advised?” None other than Goldman Sachs. So, we have a Central Banker installed in Greece, and now Monti in Italy. Boy, oh boy, is it going to be tough to rout them out… I can clearly see the central banker money from nothing puppet strings from here.

The U.S. Post Office just reported losing $5.1 billion in the past year! Oh, but if only it were that good, for they actually lost $10.6 billion considering they are underfunding their retirement OBLIGATIONS by $5.5 billion:

NEW YORK (CNNMoney) -- The U.S. Postal Service released its annual financial results on Tuesday, and they're nothing to write home about.

The agency reported an annual loss of $5.1 billion, as declining mail volumes and mounting benefit costs take their toll. The Postal Service said its losses would have been roughly $10.6 billion if not for the passage of legislation postponing a $5.5 billion payment required to fund retiree health benefits.

What a country! We vilify retirees because they were made a promise and worked hard all their lives. Our “rule of law” gives ALL stakeholders priority above retires! Talk about ridiculous. This is exactly how my Grandmother was screwed out of her entire retirement – she worked at Chaffee’s Department Store for more than 30 years. One year after she retired, they filed for bankruptcy and the judge paid all creditors first, 100% of her retirement was gone. And the law, when it’s followed which is rarely these days, is still the same in that regard. Yes capital needs to be treated nicely, but so do people who slave their entire lives away. This is one aspect of the law that needs fixing – retiree plans, promises made by companies, need to 100% funded 100% of the time, and they need to be untouchable by anyone – no bankruptcy judge, no government, no one except those who earned it. Of course the government thinks they can issue credit without paying for it and somehow magically in the future it will be taken care of… oh what a disaster.

The shyster Mortgage Banker’s Association reports that Purchase Applications fell 2.3% in the past week with refinance activity falling 12.2% - here’s Econoplicit:

Highlights
Mortgage application volume decreased about as sharply in the November 11 week as it increased in the prior week when rates, due to the crisis in Europe, dropped suddenly and substantially. Purchase volume fell 2.3 percent in the latest week with refinancing volume down 12.2 percent.

The CPI fell .1% in October with “core” rising .1%. Remember, these figures are understated dramatically:

Highlights
Consumer price inflation finally softened in October at the headline level. The consumer price index in October declined 0.1 percent, following a 0.3 percent boost in September. The October figure came in lower than analysts' forecast for no change. Excluding food and energy, the CPI rose a modest 0.1 percent, matching September's gain and the consensus projection.

By major components, energy declined 2.0 percent, following a jump of 2.0 percent in September. Gasoline dropped 3.1 percent after spurting 2.9 percent higher in September. Food price inflation softened to a 0.1 percent rise after jumping 0.4 percent. Within the core, upward pressure was seen in medical care and apparel with declines in new vehicles and used cares partially offsetting.

Year-on-year, overall CPI inflation slowed to 3.6 percent from 3.9 percent in September (seasonally adjusted) in August. The core rate nudged up to 2.1 percent from 2.0 percent the month before on a year-ago basis. On an unadjusted year-ago basis, the headline number was up 3.5 percent in October, compared to 3.9 percent in September. The core was up 2.1 percent, compared to 2.0 percent the month before.

Today's numbers are consistent with the Fed's hope for an easing in inflation. However, the headline number will be under upward pressure in November from the rebound in crude oil prices.

Inflation is the bane of the people, but the boon of the bankers. Here’s how Shadow Stats calculates inflation, the way it used to be calculated prior to all the hedonistic tweeks – gee, that’s many multiples of the advertised inflation:

The Treasury International Capital (TIC) Report came in with a large positive number in September. Econoday credits flight to safety, I credit a complicit Treasury that is falsifying accounting along with the “Fed” who has effectively taken over the Treasury Department. I don’t trust one, not one figure, that comes from either of them. Still, here’s the latest edition of Inside Pravda:

Highlights
Volatility in international financial markets made for a second straight month of increasing inflow into long-term US securities, at $68.6 billion in September following August's revised $58.0 billion. These follow inflows of only $9.1 billion and $4.1 billion in the two prior months. US investors, repatriating their funds, were small net sellers of foreign securities in September.

But increasing demand for US securities is narrowly based into Treasuries in contrast to outflows for corporate bonds and especially US equities which is no surprise given the general move into safety and away from risk. Net outflows from equities were a very steep $19.2 billion in September following August's $6.5 billion outflow.

When including short-term securities the story is the same with net inflows at $57.4 billion in September vs an $89.3 billion inflow in August that follows significant outflows in the relatively quiet months of July and June. Country data on US Treasury holdings shows increases for the three major holders -- China, Japan, UK.

Here’s the entire TIC report for your fraudulent reading pleasure:

Are we having fun yet?

Get ready for some more “strength” in manufacturing numbers – I’m getting tired of talking about how our “productivity” is really a measurement of money(ness), we all know that we produce very little and that the bulk of our production has been sent overseas:

Highlights
In a convincing sign of economic strength, industrial production surged 0.7 percent in October reflecting a very strong 0.5 percent rise in manufacturing output and a 2.3 percent rebound in mining output. The rebound in mining follows a sharply downward revised 0.5 percent decline in September, a revision from an initial reading of plus 0.8 percent which is largely responsible for a downward revision to total September industrial production from plus 0.2 percent to minus 0.1 percent.

But the downward revision to September is a footnote compared to October's strength in the key manufacturing component where gains were led by a 3.1 percent surge in autos as the rebound from prior Japan-supply dislocations appears to be hitting a peak. Excluding autos, manufacturing still posted a second-straight and respectable 0.3 percent gain. Overall output of consumer goods shows a very strong 0.5 percent gain in the month with business equipment output extending its long run of strength, up 1.0 percent in the month.

Other readings in today's report include a five tenths surge in total capacity utilization to 77.8 percent which is the highest reading of the recovery (prior month revised to 77.3 percent). Output at utilities had little bearing on October's results, slipping 0.1 percent in the month.

It's important to note that today's report includes only shipments which are coincident data. Government data on factory orders and unfilled orders for September, which are leading data, were mixed though ISM data on October, released at the outset of this month, point to increasing levels of orders. Despite all the troubles in the domestic job sector and questions over European demand for US goods, the manufacturing sector is once again the focal piece of economic strength.

The traditional non-NAICS numbers for industrial production may differ marginally from the NAICS basis figures.

Again, we manufacture money(ness) and send everything else overseas. Our manufacturing base has become so pathetic that just a few airplanes can send this data jumping one way or the other, and oh yeah, we really only have one major aircraft manufacturer left, and they actually manufacture the majority of their new airplanes overseas but assemble them here – where they wind up counting in this statistic because they use the sale price without accounting for the money sent overseas to pay for the subassembly work done there.

And while I’m talking about Boeing, they continue to blackmail Washington State, now getting ready to upgrade the 737, they are threatening to leave the state to get a better deal. They would pack up their assembly lines here, build new factories, move all their equipment, and hire new employees, just to get a sweeter deal from some other state willing to buy this great deal. Completely pathetic, no state should have the ability to offer financial incentives and tax breaks to corporations, period! This is a part of separating money from politics – politicians are not supposed to be in the business of buying favors from corporations, and vice versa. The playing field will only be level when money is separated from politics.

Below is a chart showing Capacity Utilization from about 1970. Remember that capacity utilization is a comparison between what infrastructure we have in place to produce, versus how much we actually do produce. All the numbers on this chart are historically pathetic, but remember that over these past four decades that we have been massively shedding capacity! So, not only is capacity falling, but we’re utilizing it less and less which means we are likely to continue to shed that excess capacity. Again, it is going overseas – just look at the overall trend of Capacity Utilization, one of the few measurements that isn’t taken in dollars: 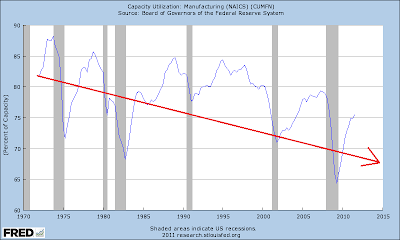 Now take a look at the number of Employees in Manufacturing. We currently have the same number in Manufacturing as we did in 1942!! This, despite the population doubling in size! Again, this is one of the few measurements not in dollars, but in this case in people: 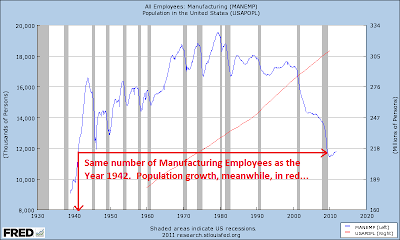 Yes, we have become automated in our production, but we have also shipped the majority of our manufacturing jobs away while we concentrate on producing financial schemes designed to enslave the world in debt.