Hooray! The Borg Technocrats have saved us already, even though they have yet to lift a metallic finger.

The Borg took a huge whack not at a mole actually, but an Italian Elephant. This event instantaneously brought upon mass-euphoria.

The market has more-or-less been in a continual state of euphoria recently having been saved (by something), for the 83'rd time in the last 63 days.

Is this another 6-Sigma event? I will get back to that in a moment, but first consider a few charts. 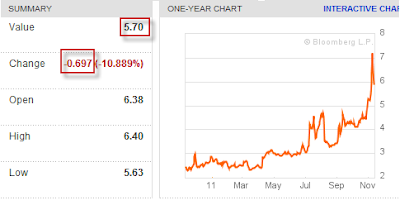 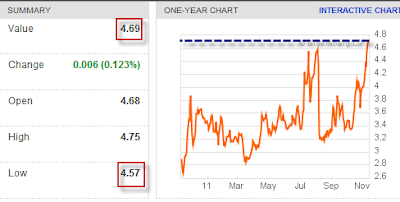 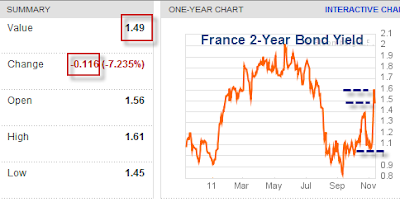 While the Italian elephant took a big whack, the Spanish mole did not. France, an even bigger elephant than Italy, barely budged in relation to the huge recent surge in yields.

This should give notice that the rise in French yields cannot be blamed on the huge gaff by the S&P, accidentally sending out a notice of a rating change lower on France (that the S&P immediately took back).

The irony is the S&P should cut the rating of France.

In my article France, the New Elephant in the Room I stated ... "The two-day move in French bond yields vs. German is likely a 6-sigma event. Today alone, the 2-year yield rose 27 basis points vs. 2 for Germany."

One inquiring mind intrigued by the idea, sent in the following charts with the comment "no credit required. It was your idea: I just put it into my Bloomberg. Love your site." 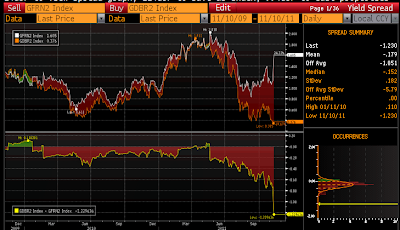 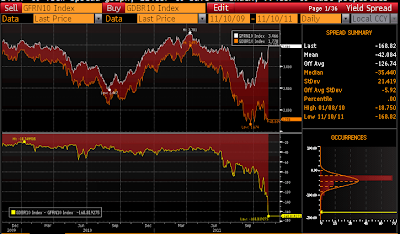 As shown in the upper-right of each chart with a label of "Off Avg StDev" the first chart depicts a 5.79 sigma event, the second a 5.92 sigma event.

Financial Risk Manager has this explanation of 6-Sigma Events.

A six sigma event assumes a 99.99996 % probability of occurrence. For a daily horizon this translates into one event happening once every 2,500,000 days.

All the recent market slumps i.e. '87 Crash, Mexican Tequila effect, Russian Devaluation, Asian Crisis and Internet speculative bubble, .. have all been six sigma events and they've all happened in the past two decades.

That such event happen far more frequently than expected says that assumptions of financial models simply are not correct. 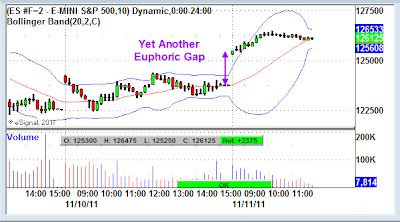 I expect that gap to fill sooner rather than later as whack-a-more euphoria wears off.

Don't worry, there is no reason to expect the current trend of 83 euphoric events in 63 days will end any time soon.

On the other hand, don't expect any of these euphoric events and announcements from Borgs will accomplish anything.

Finally, do expect more 6-sigma events, with increasing frequency, in spite of what the odds suggests. Borg technocrats and EMU bureaucrats will make sure of that.