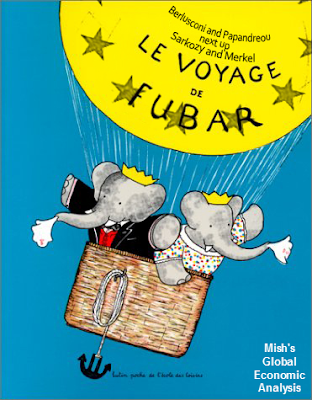 The image, sent by a reader who did not wish any credit says "I re-worked a 1932 French children book cover Voyage de Babar. Hope you like it."

The reworked image initially only contained Merkel and Sarkozy. I suggested adding Papandreou and Berlusconi and the words "next up" and there you have it.

The true original is in public domain, from http://en.wikipedia.org/wiki/File:Babar2.jpg.

In the spirit of Sunday Funnies I invite you to read a true comic sent in by the father of an 11 years old posted earlier.