France may lose its place as the second-biggest wheat exporter after failing to win more than a dozen tenders in Egypt, the world’s biggest buyer, as shipments from Russia, Ukraine and Kazakhstan overwhelm markets.

Egypt favored cheaper supply from the Black Sea region in the past 17 tenders and cargoes to northern Africa from France’s Rouen, Europe’s biggest grain-export hub, fell to a four-month low in the week ended Nov. 2, port data show. France’s crop office expects a 23 percent drop in shipments in the 12 months ending in June, the most in at least a decade.

That’s reversing last season’s trend, when French cargoes jumped 16 percent to a record as Russia and Ukraine cut sales to ensure domestic supply. Prices that reached a three-year high in February are plunging after both countries eased restrictions. Output is also expanding elsewhere and the United Nations expects the biggest-ever global harvest. Wheat may drop another 20 percent in Paris by May, said Greg Grow, director of agribusiness at Archer Financial Services Inc. in Chicago.

“The world is awash with wheat and unless you can compete with the Black Sea you’re stuck,” said Tom Fritz, the Chicago- based co-founder of EFG Group LLC, a researcher and adviser to commodity traders. “The bias is for lower prices in an effort to clean up the glut.”

Here are charts of wheat and soybeans. 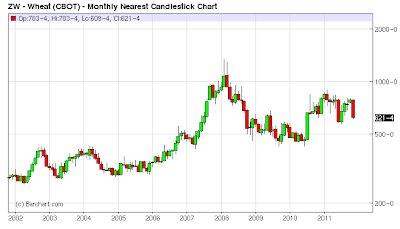 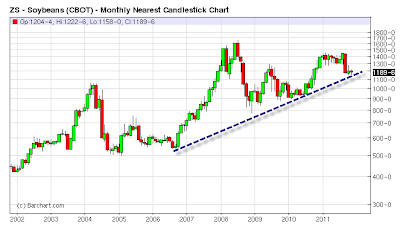 So what's holding up the price of soybeans? Once again, I don't know, but I doubt it lasts. I could be wrong.

So what's the point of this "I don't know post?"

My point is in regards to inflation.

Inflation was rampant 2003-2006. One only has to look at housing and commercial real estate prices to see it. Housing prices exploded. The price of wheat went nowhere. The price of soybeans went nowhere in an interesting way.

Now we have a housing bust and there is no credit expansion. Yet "inflationistas" point at commodity prices as a sign of inflation.

I keep asking "where is the inflation?" I keep answering "China where credit expansion is 30% annually."

The reality is much of these movements are noise.

Weather is not Inflation

Inflation and deflation are about the expansion of money and credit, not about weather, crop failures, export cutoffs or government rules and tariffs that drive up prices.

However, if you are a misguided soul who thinks rising prices are tantamount to inflation while ignoring prices movements to the downside of 40% in housing ($400,000 on a $1 million home, or more), then go ahead, stick to your belief.

Scream about prices and you will be right more often than wrong even if you miss the big picture or what is really important (credit expansion, asset prices, and jobs).

No Food at Any Price

Reflect on that for a moment, then reflect on the absurdity of Jim Rogers' July 2011 preposterous statement "No Food at Any Price"

I suggest there is a glut of wheat. Moreover, I think there could be a glut of corn were it not for inane ethanol policies in the US.

In contrast, Rogers thinks there will be no food at any price. The idea is patently absurd.