The ECB stepped into the fray once again today but the the results of the Spanish debt auction today speak for themselves. The rate on 10-year bonds is close to touching the 7% mark.

The BBC reports on the "Dreadful Result"

The auction attracted bids worth 1.5 times the securities offered. The so-called bid-to-cover ratio was down from 1.8 in October.

"The result was dreadful. They didn't manage to raise the full amount and the bid-to-cover is really poor," said Achilleas Georgolopoulos, rates strategist at Lloyds in London.

"The fiscal profiles of Spain and Italy are different but their yields seem to be aligning now."

Bloomberg reports "Volatility on Spanish sovereign debt was the highest among developed-country markets today, according to measures of 10- year bonds, two-10-year spreads and credit-default swaps. The cumulative change was 5.1 times the 90-day average, the Bloomberg gauge showed"

An official denial from a ranking Spanish government official suggests a bailout of Spain is now imminent.

Spain is "absolutely not at risk of a bailout," Salgado said on Cadena Ser radio, after rates for the government to borrow money rose to dangerous levels.

"The sustainability of our debt is beyond all doubt."

For a discussion of the "official denial" concept, please see Eurozone Breakup Logistics (Never Believe Anything Until It's Officially Denied)

In "Debt Crisis Live" The Telegraph reports Spain's finance minister Elena Salgado says there is a "systemic attack" on European sovereign debt going on, and that the ECB must keep on supporting government bonds by buying them until some other instrument is put in place.

Clearly Salgado is talking systemic nonsense. Yields in Spain are approaching 7% for a simple reason: Spain cannot possibly pay back what is owed.

The Telegraph also reports on huge protests in Italy and Greece:"We will throw all of them out," promised a banner held aloft by students, while another carried by anarchists read: "In the face of tyranny, one must choose between chains and arms."

Here is a picture of a protest turned violent in Italy. 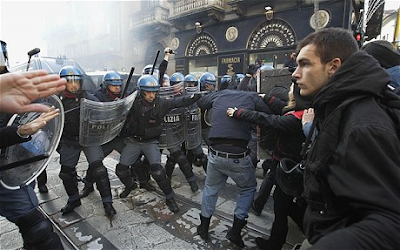 Merkel Rules Out Everything

Here is a nice quote at the 10:45 mark from Debt Crisis Live.

10.45 Mrs Merkel has been speaking in Berlin this morning, and she seems to be ruling out everything. She said neither joint euro-area bonds nor using the European Central Bank will solve the debt crisis.

Apparently a "snappy debt cut" is also out of the question. She said:

Quote I’m convinced that none of these approaches, if applied right now, would bring about a solution of this crisis.

Which is all very well - but what the markets want to know is, what IS the solution?