Equity futures are zooming this morning as Greece installs a central banker to be its new Prime Minister – R.I.P. the people of Greece, you have my deepest sympathies. You have been captured, you lost a very significant battle for freedom and your future is very bleak as it will be much harder to root out the tentacles sucking the life blood from your country and your productive efforts. On this “wonderful” news, stocks forgot about all the other countries saturated with debt and are celebrating with joy over this central banker coup d’état. The dollar is down, bonds are down, oil is zooming, gold & silver are lower, and food commodities, fellow sharecropper, are higher.

Obviously the central bank won a major victory with L-Pap in control of Greece. If this is their playbook, then the people of Europe are in deep trouble – this is akin to having Jamie Dimon as President of the United States, the very last person on the planet who should hold that office.

Let me make this really clear about Europe and everywhere else – the central banks are perpetuating the big LIE while they use their own turbulence to seize further control. One aspect of the big LIE is that with their debt as money scheme that you can somehow produce more “money” to inflate away the debt! That is a total LIE because IT IS IMPOSSIBLE TO INFLATE AWAY DEBT WHEN YOUR MONEY IS BASED ON DEBT!!!

What is possible is to produce non debt-backed money to dilute the debt, but that doesn’t work either because you wind up paying back the debt in inflation instead of directly paying it. The only way to truly progress the world’s economy is to cleanse out the debt, replace large portions of it with sovereign money – but as long as the debt is there, the people of the world will continue to be slaves to and victims of the central banks.

Say it with me, “I, ___________, NO LONGER CONSENT TO THE LIES!” Trust me, say it enough times and then act on it, you will not only feel better, but you will CLAIM YOUR FREEDOM by no longer supporting the central banker box.

Jobless Claims fell by 7,000, not the 10k touted by the media because they take the revised higher orange from last week and compare it to this week’s trumped up apple. Here’s Econocomplicit:

Highlights
Jobless claims are edging lower in what is a positive indication that businesses are expanding their workforces. Initial claims for the November 5 week fell a convincing 10,000 to 390,000 for the lowest level since April (prior week revised 3,000 higher to 400,000). The four-week average, down 5,250 to 400,000, is also at its lowest since April.

Continuing claims, in data for the October 29 week, are down 92,000 to 3.615 million and are at their lowest level of the recovery. The unemployment rate for insured workers is unchanged at 2.9 percent.

There are no special factors distorting the data and there's no significant market reaction to the report, which however may boost demand for risk through Thursday's session.

Love this “risk demand” terminology – what manure. Hey, it takes numbers below 350k on this weekly report to even start indicating any job growth whatsoever – it is not there and it’s been years and years since we’ve been there. When you saturate the economy with debt, you destroy real productivity and you increase joblessness: 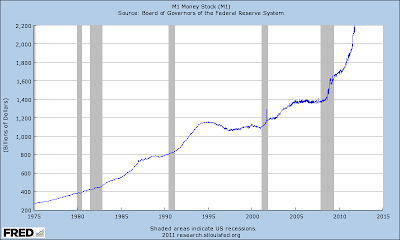 Mean Duration of Unemployment Vs. Base Money: 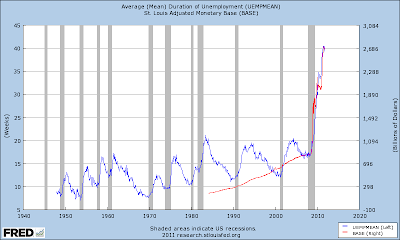 The chart above depicts the Mean Duration of Unemployment in blue. Note first the correlation between money production and unemployment duration – keep in mind how your money comes into being, as a debt. Also note how the current “recession” that, according to the lies, ended awhile ago, has produced a rise in the Mean Duration of Unemployment that is double anything since WWII. That is showing you that what is occurring now is on a much higher level than previous recessions. Again, once the debt saturation point is reached, the stimulus effect of credit production reverses to become an economic anchor. Now is NOT the time to be installing central bankers into government!!! Of course there is NO TIME where that’s appropriate, ever, it is the ultimate conflict of interest!

The Trade Deficit for September came in at -$43.1 Billion, down from -$45.6 B the month prior. While better than the $60 Billion+ deficits we were running at peak, these levels are still insane and completely not sustainable in the long run. When economic “analysts” have nothing real to say, they tend to revert to a vast array of numbers to baffle you with their lack of understanding – so, instead of printing all of Econoday’s minutia in this report, here are just the first and last paragraphs, note the hmmm topic of discussion:

Highlights
The U.S. trade deficit unexpectedly improved in September but a significant part of it appears to have been related to flight to safety to gold during September's weak financial markets. The September trade gap shrank to $43.1 billion from $44.9 billion in August. The latest shortfall was narrower than analysts' expectations for a $46.3 billion deficit. Exports gained 1.4 percent after edging up 0.1 percent in August. Imports rose 0.3 percent in September, following a 0.2 percent decline the prior month.

About half of the unexpected improvement in the deficit came from gold exports. Still, exports were moderately strong otherwise and imports were mixed. Given weakness in Europe, the report is encouraging even after discounting gold movement.

Hmmm. Gold exports high enough to comprise half the “improvement.” Think in terms of money when you read all these reports and they will make more sense – all of it is measured in money. Debt money. Gold flying around the world and zooming to the bizarre level of $1,800 an ounce… Now take another look at the chart I posted above with money Vs. unemployment. The problem IS our money! And specifically, the problem is WHO it is that was wrongly given the ability to make it from nothing while indebting everyone else!

This whipsaws everyone with waves of earnings robbing inflation and asset stripping deflation! Speaking of which, Import and Export Price inflation is slowing, the latest Import figure fell to -.6% in October, while Import Price inflation fell from +.4% to -2.1%, and the year over year figures are coming down significantly although still very high:

Highlights
Inflation pressure from imports is easing with import prices down 0.6 percent in October, following a revised no change in September and a 0.4 percent decline in August. The headline decline reflects a third straight decline for petroleum prices which fell 1.0 percent in the month and which pulled a host of petroleum-related categories lower including industrial supplies which fell 1.4 percent. Yet in isolated but still important signs of pressure, import prices for consumer goods excluding autos jumped 0.7 percent following a run going back to June of 0.3 percent gains.

Export prices like the headline for import prices also fell, down a sharp 2.1 percent in the month and reflecting a 6.5 percent drop in agricultural prices. Export prices for consumer goods excluding autos, in contrast to the import side, fell 0.3 percent.

Year-on-year rates of inflation slowed with imports at plus 11.0 percent and exports at plus 6.3 percent. Today's report should boost confidence that inflation is a diminishing threat to the economic outlook especially given ongoing strength in the dollar tied to the debt crisis in Europe

Waves of inflation, waves of deflation, but with each step it is inflation that is the long term trend, and it is inflation that destroys currencies and nations. Along the roller coaster of the waves, it is the people furthest from the production of money that suffer. Money is a human construct and it should never be constructed in such a manner as to benefit the few at the expense of the many.

That is NOT socialism talk, that is the natural rule of law regarding common currencies – common currency MUST come into existence in a manner that does not advantage one over another. Once in the system equally, then TRUE competition can occur! It’s NOT competition, capitalism, or “free market” when a few private individuals create money from nothing indebting the rest of the population! A nation is not Sovereign, it is NOT FREE when it is in debt, and there is no reason it ever should be.

You are not free when you are in debt. You are not secure when your nation is bankrupt. Pursue FREEDOM and you will find true security.

Private Central Bankers as Prime Ministers or Presidents? The people are losing the real war that is humanity versus those who enslave them.