Tonight I received a thoughtful email from reader Rick Cameron who made some observations and notes way back in 1992 and recently went back to review those notes.

His notes are regarding the European ERM, the Exchange Rate Mechanism, that was supposed to reduce exchange rate variability and achieve monetary stability in Europe.

Before I list the thoughts of Cameron, here is some background information on the ERM and the countries involves:

The UK entered the ERM in 1990 but in 1992 Britain exited the ERM after the pound sterling came under pressure from George Soros, dubbing Soros as "the man who broke the Bank of England".

In 1993 the currency band had to be expanded 15% to accommodate speculation against the French franc and other currencies.

Wikepedia notes the ERM came to be known as an "Eternal Recession Mechanism" after Britain fell into recession during the early 1990s.

With that backdrop, please consider this Email from Cameron.

I am a student of history, and I was an active investor in 1992. I have recently gone back and looked at my notes and the charts and the media comments about the UK and the European Exchange Rate Mechanism.

The parallels between the UK in 1992 and Germany in 2011 are striking.

Under the ERM, the (financially) stronger countries would be responsible for the weaker ones. Then the Berlin wall fell, the Eastern European countries tanked, and the UK was on the hook to support them.

There was lots of pressure on John Majors not to continue that policy and to leave the ERM. Political dithering followed, complete with bold speeches by both Brits and the Europeans about unity. The Brits held their ground in the face of enormous pressure on the pound, culminating with a $28B currency buyback in mid-September.

Students of history know what happened next: The Brits finally threw in the towel, left the ERM, and the pound tanked from $1.95 to 1.70 from September 19th to September 26th, then to $1.50 by November. George Soros made $2 billion.

Every article I read today about the ECB, the Germans, and the euro, resembles closely some similar article I have about the Bank of England, the British government, the ERM, and the eventual fall of the pound.

To me, it seems like an inevitable march down the same road - same players, same dithering, same posturing, same lack of attention to any of the real problems, same case of refusing to deal with any of the real issues - and sadly, the issues in 1992 were EXACTLY THE SAME as they are today.

Finally, we need to not forget that the guy who stubbornly held onto the concept of the Brits supporting the ERM, no matter the cost and pain to the British taxpayers was none other than John Majors, who at the time was working on the Maastricht Treaty.

To quote Peter, Paul, and Mary "when will they ever learn?"

Have a good day

Yes indeed. We have exactly the same issues and same players. Note that the UK is still on the outside looking in, with the rest of Europe clamoring to get the UK in.

The smart play would be for Cameron to stay on the outside, looking out as noted in Will Cameron Sell UK Down the River for Worthless Promises? Two-Speed Europe and the Clutches of France

Since 1992, there has been an obvious change in political leadership. However, the politicians involved all still seek the same proverbial free lunch.

Irony of the  Maastricht Treaty

It just took some time to play out.

Now, instead of attempting to defend untenable currency targets, the ECB, the Eurocrats, and the IMF all have their hands full attempting to maintain untenable interest rate targets. With yields soaring in Greece, Spain, Italy, Ireland, Portugal, and Belgium in relation to Germany, the Troika has failed.

To alleviate interest rate concerns and fiscal instability caused by the Maastricht Treaty, politicians now openly discuss breaking up the Eurozone, which of course will immediately kick off a full-blown currency crisis in various countries. 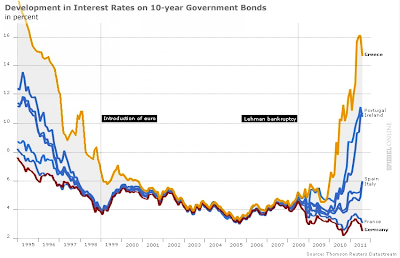 When the currency crisis happens and the Eurozone breaks up as is inevitable, Europe will have gone full circle on both interest rates and currencies, with politicians chasing their tail every step of the way.