The ZEW German economic sentiment index fell to -55.2 in November from -48.3 in September, below our forecast (-52.0) and consensus (-52.5). The current reading is far below the long-term average of about +25 points and reflects the very low expectations of the financial experts taking part in this survey for German economic activity over the next six months.

The ZEW's current situation index declined from 38.4 in September to 34.2 and the gap between sentiment and the current situation remains large. Current readings are now very close to those in June 2008, before the current situation index went into free fall and a sharp recession followed. The ZEW said that "world trade is weakening and the public debt problems in the Eurozone and in the US weigh heavily on business activity. These risks could even gain more importance and thus could further harm economic growth in Germany."

In our view, these figures underline the very pessimistic outlook of financial sector experts which is increasingly shared by others and clearly shaped by the sovereign debt crisis in the euro area. They point to growing risks to our German GDP Q4 forecast of only a slight contraction in Q4 GDP by 0.1% q/q. 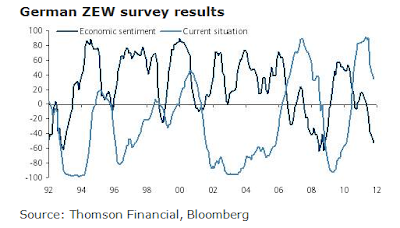 Europe is already in recession and it's going to get worse, much worse. European country after country is struggling to little avail to prove to the bond markets it is going to tackle budget problems.

While long-term structural reforms are certainly needed, austerity measures in Italy, Greece, Spain, and Portugal are going to bite, and bite hard.

Moreover a Technocratic Showdown in Greece with Troika is underway.

The leader of Greece's main conservative group Antonis Samaras said on Monday his New Democracy party would not vote for any new austerity measures and said the mix of policies demanded by international lenders should be changed.

"We will not vote for any new measures," Samaras told a meeting of his own MPs.

In Italy, there are more people on retirement than there are workers. Good luck with a program to make it easier to fire people.

It will be impossible to fire workers and maintain pension benefits.

And what happens to spending and GDP when benefits are reduced and people are fired? What happens to the bond market if that does not happen?

These are the questions and scenarios analysts should be asking and discussing instead of making wooden forecasts of slight recessions.