Stocks continue to move down still inside of that triangle I showed yesterday. 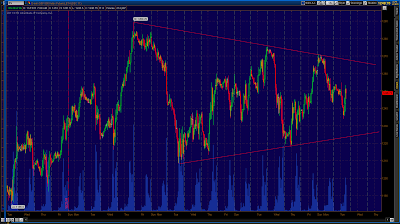 The dollar is higher, bonds are higher, oil is unfortunately hanging in there, so are gold & and silver, while food commodities also refuse to surrender.

The war mongers are currently deploying step #1 from their How to Start a War and profit from it playbook. That first step involves villainizing the “enemy,” and creating fear which justifies their action. Just look around the news and you will see it. Embarrassing, shameful, and disgraceful that my country, America, does so much of this. We have forgotten our basic tenants – it is the pursuit of FREEDOM that brings security, not the other way around. And just consider this; you cannot be secure when you bankrupt your nation; debt is the opposite of sovereignty; and the fact that America spends as much as the rest of the globe combined on “national defense” is what I can term only literally insane – stupid is the polite version.

Yes, it is my belief that Freedom’s Vision would put an end to this – it is the creation of sovereign money that would drive the evil from our political system, again the most important thing is WHO is in control of the production of money. The production of money corrupts those who make it, even your representatives – it is truly the root of evil, that is why your representatives must have strict checks and balances placed on them to ensure the quantity of money targets zero percent price inflation, that is how you prevent ridiculous and unnecessary wars, yet still have the ability to truly have a strong defense.

The PPI, which leads the CPI, is falling from its elevated levels. Remember, these statistics do not reflect reality in terms of magnitude, but they do reflect trend information, and it appears that the latest wave is turning back down. Here’s Econosupportthebox:

By major components, energy fell 1.4 percent after rebounding 2.3 percent in September. Gasoline dropped 2.4 percent, following an increase of 4.2 percent. Food costs decelerated to a 0.1 percent rise, following a 0.6 percent boost in September. At the core level, the PPI was unchanged in October, following a 0.2 percent rise the month before. Analysts expected an increase of 0.1 percent. Declines in prices for prices of passenger cars and light trucks played a key role in keeping the core flat.

Retail Sales in October supposedly rose .5%, this is down significantly from the 1.1% the month prior. Keep in mind that this report is extremely flawed, it measures sales in dollars and since inflation is incorrectly measured is not adjusted appropriately. Since inflation is way understated, it overstates Retail Sales. Another flaw in this report is substitution bias, that is it only measures stores that are open over the last year and fails to account for stores that have closed. This is a ridiculous measurement, and it would be a relatively easy task to make this report truly meaningful, but truth and transparency are not high on the list of those who control economic statistics:

Retail sales on a year-ago basis in October posted at 7.2 percent, compared to 7.9 percent in September. Excluding motor vehicles, sales were up 7.3 percent on a year-on-year basis, compared to 7.7 percent the month before.

Today's retail sales report shows a consumer much more willing to spend than sentiment surveys suggest. This is a good start for putting together estimates for fourth quarter GDP growth. On the news, equity futures improved.

What nonsense. The only value in this report is how one item is faring versus the other. The fact they mention the GDP in the same breath as this report shows you that they count on the misread of inflation to support our phony production numbers.

Highlights
Optimism is appearing in the New York region's manufacturing sector where the assessment of general business conditions, at plus 0.61, is in positive ground for the first time since May. Really improving is the six-month outlook for general conditions which is at plus 39.02 from October's unusually low 6.74. Business sentiment, like consumer sentiment, may finally be picking up after the debt limit debacle in August.

Other data in today's report include a second month of growth for shipments but a contraction in the sample's workforce. Yet if optimism is realized, the gain for orders should trip gains for hiring. National shipment data on the manufacturing sector for October will be posted with the industrial production report on Wednesday. On Thursday, the Philadelphia Fed will post its November report.

My take is that most of these manufacturing statistics are simply measurements of inflation, not of actual production. Instead of measuring units of production, these reports all first measure the flow of sales measured in dollars. Then in this case that is turned into an index level. So if, for example, a boat manufacturer makes the same 10 boats they made this year as they did last year, but they raise their price 10%, then manufacturing is reporting as up 10%!

But NO, manufacturing was not up at all, it was flat. And this is the “miracle” that is our jobless recovery and is where the supposed gains in employee utilization magically appear… When output is measured in dollars instead of widgets, then it’s possible to have fewer employees manufacturing the same output with fewer widgets, but at a higher dollar amount as the dollar is debauched. That is America “productivity” in a nutshell – we manufacture and then measure money(ness). While there have been technological advances making employees more efficient, it is vastly overstated when considering this monetary miss-measurement effect.

Now for a pet peeve of mine that will hopefully open people’s eyes, because it doesn’t just apply to this example, it’s happening everywhere… Here in Washington State we have some of the world’s most beautiful parks. Some parks are national, some are owned by the state, and some by local governments. These parks, of course, belong to the people collectively – they have already been bought and paid for. The maintenance of the parks, then, is the collective responsibility of the people – from my perspective one of the few legitimate activities of government. To pay for the maintenance of state parks we pay both property and sales taxes.

But our state is broke. This is because they are too foolish to create a state chartered bank – instead they finance all their functions through Wall Street and the big central banks, paying interest to private individuals – all unnecessarily. And then the politicians, of course, unrestrained by proper checks and balances, begin spending money on all sorts of things where it’s not appropriate for government to be. So, as they run out of money, they turn to the things that people consider a must, the things that are the true legitimate functions of government, and they remove funding for them while charging new “use fees,” aka taxes, for people to use their own parks for which they have already paid for and were already taxed for. This is also true for national parks that now do the same damn thing.

In Washington State you now must spend $30 on an annual pass that is only good for ONE VEHICLE. If you visit the park on your motorcycle, for example, and then want to return with your kids in your van, thank you, that’ll be another $30 please. This was not put to a vote of the people of course, it was just foisted on us in a rob Peter to pay Paul scheme. I no longer enjoy my beautiful state parks and am angry every time I see one. I stopped visiting national parks a long time ago.

Of course the projected revenue from this parks money scam is not panning out like the scammers thought – gee, what a surprise:

TACOMA — Sales of a new Washington state park parking pass — the Discover Pass — is not raising the cash officials expected.

Lawmakers have mostly cut off parks from taxpayers’ help, whether or not the new $30 annual parking fee can fill the gap.

If the program fails, the parks agency would have to find new money or close most of the state’s 116 parks, The News Tribune reported in Sunday’s newspaper.

Some officials hope sales of the pass will improve during its first spring. But they worry people will continue to dislike the parking pass because it can’t be transferred from one car to another. That issue should come before the Legislature this winter.

“I heard from dozens of people personally that just said, ‘I’m not buying it,”’ said state Sen. Kevin Ranker, who is writing a proposed update to the law he sponsored that created the pass.

Other factors could pull Discover Pass sales numbers down or up: weather, more aggressive marketing, and an option for drivers to buy the pass when renewing their license tabs, which they have been able to do only since late August when notices went out to drivers whose tabs expired in October.

The passes brought in $6.5 million from July 1 to Sept. 30, with parks taking the biggest share at 84 percent and the rest divided equally between the Department of Natural Resources and the Department of Fish and Wildlife.

The state hopes to raise at least $64 million in the first two years. State parks officials concluded from surveys that’s how much visitors would pay.

Did you catch the part about “marketing” to up pass sales?! Trust me, you do not have to spend money to “market” our parks, you only need to do that to market your ridiculously reckless tax scheme designed to shell game our state’s budget.

The truth is that visiting parks is one of the only healthy activities left, and it is the lower income levels who use them to their advantage giving them healthy inexpensive family time and activity. Well, there are more economically disadvantaged people being created in this country everyday – throw a $30 pass on them and they will simply refuse to enter, making the parks then only for those with wealth. This is why I choose not to feed it.

Of course the threat is that they will close the parks to the people who already paid for them and indeed own them! Okay then, close away! Perhaps closing our parks will highlight the stupidity of our national money system and how it funnels wealth straight up to those who produce money from nothing.

Truly it’s just hard to watch, especially when you know it simply doesn’t have to be this way.