Equity futures are bouncing higher this morning, the dollar is lower, bonds are slightly lower, oil is trying to regain the $100 mark after falling beneath yesterday, gold & silver took a tumble yesterday and are close to even this morning, and food commodities are breaking down from their recent ranges.

Since I’m talking about food commodities, I see what appears to be a very large Head & Shoulder’s pattern appearing in most. Below is a weekly chart of wheat, showing the development of that formation over the past year: 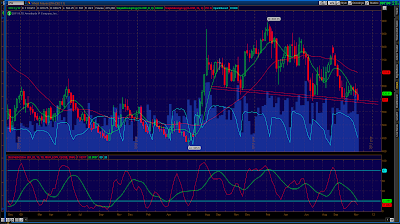 That is a huge pattern, a break below that neckline at 600ish would create a target at nearly half that level. Got to tell you, that would be a good thing, but of course it would be fought tooth and nail by those who wrongly were given the ability to control the production of money throughout the globe.

Looking at the S&P 500, it clearly broke down from that triangle yesterday, and today it is retesting the breakdown, something that is completely expected: 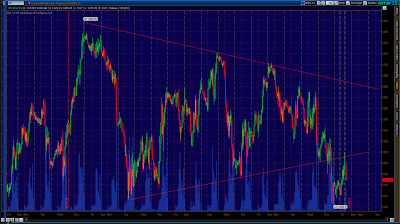 The meltdown of MF Global is really beginning to impact world markets. The derivative exchanges are refusing to release and guarantee funds, thus we're seeing the cost of credit start to rise sharply again and we're seeing players in the derivatives space begin to see the handwriting on the wall that says, "game over." The stock market is always the last to get the memo.

There were 245 people arrested in New York yesterday… thousands now have been arrested, harassed, and physically abused as a part of the Occupy movement. Contrast that to the treatment of those who have destroyed economies, and thus millions of lives, around the globe. No, protests are going to continue, they are JUST. It is the attempts to stop what’s coming that is unjust. Karma is something that usually catches up to people in the end, my advice to all government officials and especially to the police is that you best consider your futures and THINK long and hard about which side you are on and WHO the real perpetrators are. Because there is a comeuppance on its way, it is a classic fight between good and evil, and it is evil that is going to loose. If you examine historical examples of what happens to those who commit crimes against humanity after the revolution is over, you will want to make sure you are on the right side.

The evil I’m referring to is rooted in narcissistic greed. A few sick individuals who view the planet, and the people on it, as their personal fruit bearing garden - they think it exists just for them to walk around life taking from the planet and from others. They anointed THEMSELVES the bankers of the world and gave themselves the power to create money from nothing. No elections were held, no one voted for the IMF or the World Bank. And we all know that no one voted for the “Federal Reserve,” an agency that flies in the face of the Constitution. The people were sold out by a few narcissistic Congressmen just before Christmas Day in the year 1913. That was literally the crime of the century.

But the people are waking from their debt induced coma. It seems they have a nasty credit bubble hangover and are now pushing back against the sick pushers of usurious debt. In Europe, a few politicians are now waking up to the shame, just take a listen to the following two videos:

Nice to hear the truth, isn’t it? Powerful men are squirming in their seats. They should be, and if there is any justice in the world, they will be soon be squirming in their prison cells, cells once Occupied by protestors they rounded up and put in prison. Remember, the waves you cast in life come back to you.

Supposed “Leading Indicators,” which actually trail reality and are used to manipulate others, are released at 10:00 Eastern this morning.

All this attention on Europe diverts us away from our own horrific situation created by the very same sick and twisted individuals. How long ago was it we were bumping up the debt ceiling?

Talk about sick, our nation should never have to be in debt, ever. There’s simply no reason for it. Allowing the private people who own and control the “FED” to exist was literally the treasonous act that surrendered our nation’s sovereignty. Occupy that.