The market spurted higher mid-morning over new and improved credit lines by the IMF, and another never-ending discussion by the Fed about increasing liquidity.

“The reform enhances the Fund’s ability to provide financing for crisis prevention and resolution,” IMF Managing Director Christine Lagarde said in an e-mailed statement. “This is another step toward creating an effective global financial safety net to deal with increased global interconnectedness.”

The changes, which enable countries that pre-qualify to request IMF funds without having to make as many policy changes as with traditional loans, come as Europe’s crisis threatens to spread to Spain and France. The IMF is co-financing bailouts in Greece, Portugal and Ireland and is preparing to send a team to Italy for an unprecedented audit of the country’s efforts to cut its debt.

The Standard and Poor’s 500 Index pared losses after the report.

Via email, Bank of America / Merrill Lynch says "This is Not Big News"

By the way, Bloomberg's headline title is near-perfect. The phrase "lure nations" is appropriate. "To their economic death" needs to be added.

This is what I think of the IMF as noted in To Ireland With Love. 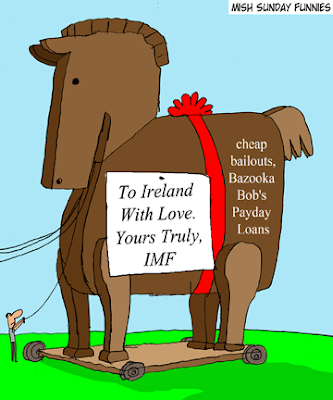 I believe we have all heard the story and know how it ends.