France, the New Elephant in the Room

On January 7, long before Italy was in the spotlight of mainstream media attention, I wrote Italy The Invisible Elephant.

It was five or six months before Italy became an uncloaked popular economic topic.

However, "elephant hunting" is now a popular sport and mainstream media has done a better job at spotting the next one (with help of S&P threats to France's AAA rating of course).

The country will increase some levies on large companies, push up the lower end of its range of value-added taxes and curb welfare spending, Prime Minister Francois Fillon said today.

"French people must roll up their sleeves," Fillon said at a press conference in Paris. "We have one goal: to protect the French people from the severe difficulties faced by some European countries."

The European debt crisis has gone from bad to worse as Italian government bond yields have soared, threatening the solvency of the Eurozone’s third-largest economy.

But things could go from worse to worst if bond yields keep rising in France, the continent’s No. 2 economy after Germany.

The French government knows it can’t afford for the bond market to turn on it. Paris announced a new round of spending cuts last week aimed at ensuring that the country holds on to its coveted AAA credit rating.

Moody’s Investors Service warned last month that it might put a negative outlook on France’s top-rung rating if Paris made too many commitments to back up its banks or other Eurozone states with tax dollars.

But France’s need to protect itself also raises doubts about its ability to extend help to Italy as Rome’s debt nightmare worsens.

Ah yes, how can you save Greece and Italy if your concern is to save yourself?

The answer is you cannot and a quick look at sovereign debt spreads will show the bond market is starting to figure that out.

To help put that spread table into perspective let's look at today's action in 10-Year and 2-Year government bonds. 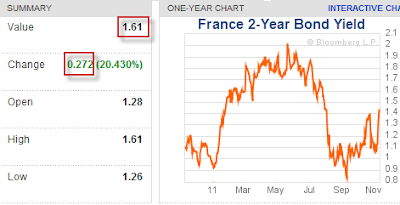 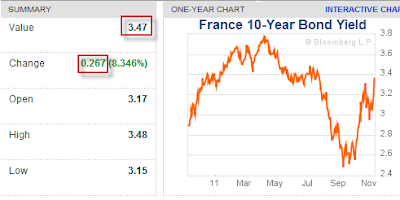 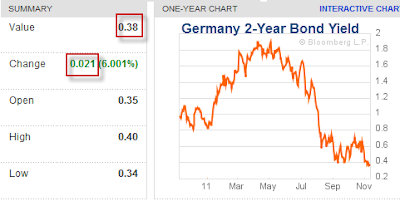 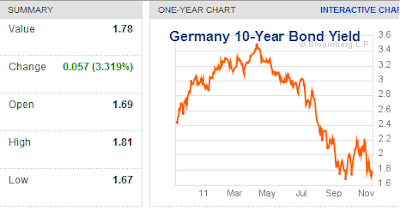 The two-day move in French bond yields vs. German is likely a 6-sigma event. Today alone, the 2-year yield rose 27 basis points vs. 2 for Germany.

Unfortunately the chart does not reflect this because Bloomberg charts are hopelessly a day out of sync with the numbers posted left of the chart.

While the equity markets are cheering the Rise of the Borg (and also the ECB stepping into the fray as the buyer of last resort of Italian bonds), a new elephant, completely visible, stepped into the room.