Here are some charts and commentary from Steen Jakobsen, chief economist at Saxo Bank in Copenhagen.

We have a new stress high in our indicators. Core Europe is under pressure.

In Europe the two new Super technocrats (Papademos and Monti) meets with EU officials over the course of next two days. Expect “compliance” to be the buzz-word, but Greek opposition party chief resists EU/IMF pressure on pledge: “…there is no need to provide written guarantee because his word can be trusted”

There is rising concern about Greece, and with S&P down nearly 19 points on the open of Europe, it looks like a new level of alertness.

So keep an eye out on ECB and its now massive support program – below is the Gross amount bought – the key this week is last week intervention size. 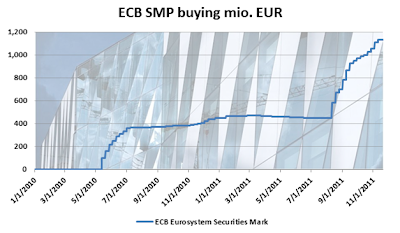 That's quite a bit given the ECB's insistence it will not be a lender of last resort.

Last week there was much ado over nothing when the ECB said it would "limit" the amount of purchases to 20 billion Euros a week. The interventionists all complained.

Did anyone bother to do the math on that? 20 billion euros * 52 = 1.04 trillion Euros and interventionists screamed bloody murder.

Intervention never works. All it can do is create a bigger problem elsewhere.

Meanwhile please ponder these charts from Saxo Bank that form the basis of Steen's assertion "We have a new stress high in our indicators." 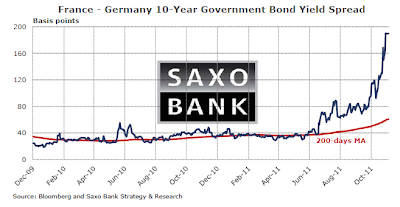 Italy and Belgium 5-Year US$ CDS 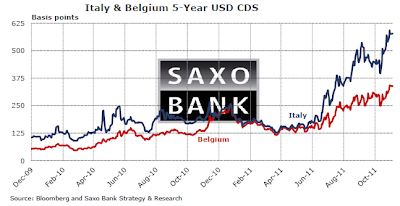 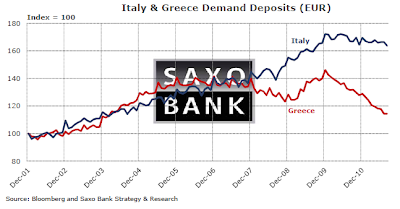 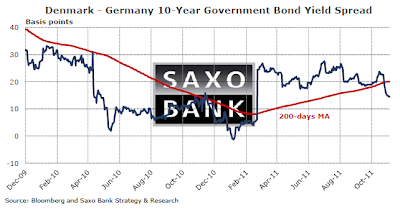 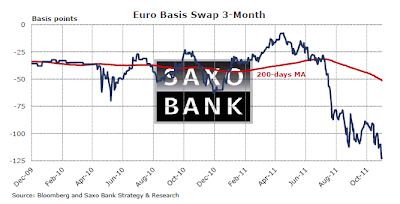 On November 3, there was an article in the Wall Street Journal that will help explain the significance of Euro Basis Swaps. Please consider Three-Month Euro Dollar Cross Currency Basis Swap Widens

Swapping euros into dollars is becoming extremely expensive, according to a leading indicator that is at its widest level since December 2008.

The three-month euro/dollar cross-currency basis swap is at minus 118 basis points versus minus 102 basis points on Wednesday. That's still shy of the minus-215 level it reached amid the financial turmoil of October 2008, but the indicator is now trading at levels where bankers say it is flashing warning signals about the functioning of money markets.

The debt crisis in Europe has created stronger demand for dollars, making it more pricey to get access to such funding. Banks and other firms that operate globally and need dollars have had limited access to the greenback, as investors have been wary of lending to them, so they have been relying more heavily on the euro-dollar swap market to meet their financing needs. This route has become increasingly more costly for them.

Traders say the three-month cross currency basis swap is showing greater stress than the one year swap because borrowers want to fund themselves past the end of the year. They also do not want to be seen as leaning on central banks for long-term funding, which is an option for them.