Equity futures are slightly lower this morning, the dollar is significantly higher, bonds are higher, oil tested $100 a barrel then retreated, gold & silver are down slightly, while food commodities are now resting at the bottom of their narrow recent range. I just want to point out that the Yen has already given back a large percentage of its move on Japan’s last intervention announcement – never works, because it is their interventions that cause the problem in the first place. If they want the cycle to end, then they need to stop intervening, let rates normalize, and let or help the debt clear.

No economic data today although the rest of the week is fairly busy, but without any major releases. I’m busy with the business this week and am going to keep these updates fairly brief.

From a technical standpoint, the markets have formed a sideways triangle. The direction of break from that triangle will tell you what the next direction is, up or down. 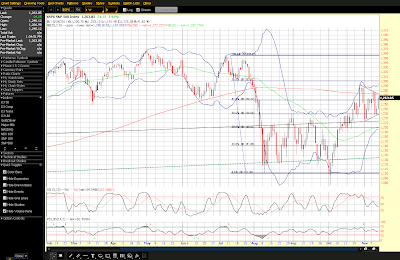 Of course it’s a disaster either way from my perspective, if the market rises then commodities rise with it, stealing from you every time you eat or fill your car up with gas. If the market breaks lower, then its asset stripping of the people as those who make money from nothing swoop in to buy up any remaining assets. Once a nation is debt saturated, everyone in it except those who produce the debt, are slaves and national sovereignty is lost. That is why our nation operates on behalf of central banks and not on behalf of the people.

Europe is simply saturated with debt. Will the Eurozone shrink, collapse, or hold together seems to be the question? The fact is that every potential “solution” to date is actually the problem and no solution whatsoever. Just look at the chart below showing the on the books debt to GDP in red, and the total debt to GDP in blue that includes off the books obligations: 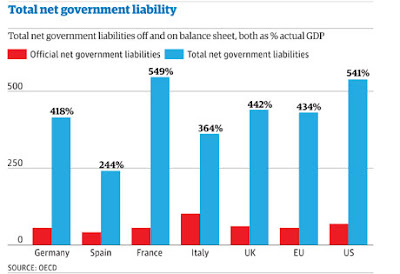 What that chart is saying is not only are we and Europe saturated with debt, but we are LIARS. We lie to ourselves, we lie to one another, we commit accounting fraud and we manipulate our statistics as not only is our debt much greater than advertised, but our GDP is as phony as the day is long. Eurozone hold together? I don’t think so. Some self-anointed bankers going to create debt money from nothing to “rescue” Europe? Laugh out loud.

No, things are going to change, and they are going to change real soon. Crackdown on the Occupy Movement? LOL to that too, forcing out protesters under the excuse of "health" concerns shows only that the police forces are paid for by the central banks. That type of move is foolish and will only generate further backlash. It's time to admit our addiction, Freedom's Vision with truly sovereign money is the cure.