Only a Handful of Stocks are Up the last Five Days

There have been few hiding places over the last five trading days. The major indices are down sharply and all sectors are also down. As the Sector Market Carpet shows, stocks in the utilities and consumer staples sectors were down the least, while technology and energy stocks were down the least. The red box to the right shows the top five gainers and losers. 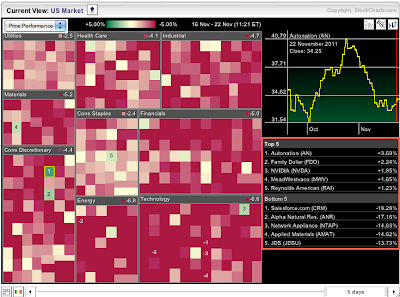 Shaza sent me this from the blog Some Assembly Required
Problems are distorted by the lens used to examine them.
Dead On Arrival: Never mind the details of the IMF's new 'Precautionary Credit Line' proposal, the IMF does not have the money to fund it adequately (estimated at $3 to $4 trillion) and it will require the support of the GOP to get the 'contribution' it would require from the US.
Balance Beam: Attempting to position itself as a support of democracy and human rights in the Middle East without upsetting the dictatorships it has and continues to support, the US has called for “restraint on all sides” in the ongoing confrontation between armed police and unarmed demonstrators in Egypt. For example, the demonstrators shot by the police should ideally die quietly and off camera.
http://ckm3.blogspot.com/

As the year draws to a close, it's worth noting some of the hits and misses of this column.

The big hits, as it turns out, include many of the gold stocks.

All but one or two of the gold stocks this column has written favourably on over the past eight or so months have done well, some more than doubling.
Advertisement: Story continues below

In May 2008, as crude oil steamed toward an all-time high of $US147 per barrel, a Goldman Sachs group predicted that the price could move as high as $US200 within the following 24 months.

Instead, during the second half of the year its price rolled over and began a free fall to near $US30 as December brought the eventful year to a close.

It now appears, however, that Goldman might just have been early in its prediction rather than simply wrong.
Advertisement: Story continues below

Oh, I know, light, sweet crude is currently trading near $US100 a barrel, and it would require a host of major events to drive it to double that level, especially during 2012.
http://www.theage.com.au/business/oil-heading-for-us200-a-barrel-20111122-1ns4b.html
Posted by expres
Email ThisBlogThis!Share to TwitterShare to FacebookShare to Pinterest
Newer Post Older Post Home