ECB Cuts Rate .25 to 1.25% in Surprise Move; Draghi Says Exit of Any Nation From Euro ‘Not in the Treaty’; Half-Truths and Blatant Lies; Case for Gold

In a surprise move the ECB cut rates by 25 basis points. They had plenty of reasons to do so such as German PMI contraction, Eurozone contraction, postponement of the EFSF bond sale, and the surprise referendum in Greece.

Surprises and emergency meetings to address the surprises are the order of the day as Bloomberg reports German Two-Year Notes Climb After ECB Unexpectedly Cuts Key Rate to 1.25%

Italian securities jumped as the ECB’s Governing Council cut the rate to 1.25 percent, a move predicted by just four of 55 economists in a Bloomberg survey. The median estimate forecast no change. Greek two-year yields rose above 100 percent for the first time after European leaders yesterday suspended aid to the nation pending a vote they said would determine whether it stays in the euro area. Significant cuts to growth forecasts are likely, Mario Draghi said in his first press conference as ECB President.

“The ongoing tensions in financial markets are likely to dampen the pace of economic growth in the euro area in the second half and beyond,” Draghi said at a press conference in Frankfurt. “The economic outlook remains subject to particularly high uncertainty and intensified downside risks.”

When you don't want say anything you say something like “the economic outlook remains subject to particularly high uncertainty and intensified downside risks” which is of course what Draghi said. It is also meaningless because it is what everyone on the planet should understand already.

Exit of Any Nation From Euro ‘Not in the Treaty’

In response to a reporter's question, Draghi says Exit of Any Nation From Euro ‘Not in the Treaty’

European Central Bank President Mario Draghi said on Thursday that an exit of a member from the euro area is not in the treaties governing the European Union. "It's not in the treaty," he said in response to a reporter's question. "We are all bound by the treaty. We cannot really conceive of situations which are not envisaged in the treaty."

It is certainly true the Eurozone treaty has no provision for exit. However, his second sentence "We cannot really conceive of situations which are not envisaged in the treaty" is a blatant lie.

Of course he can conceive of a Eurozone exit because German Chancellor Angela Merkel and French President Nicolas Sarkozy threatened Greece with expulsion yesterday.

Even without that threat, one would have to be a fool to think or believe nations will always honor treaties. The simple explanation is Draghi told a lie on purpose. The irony is the lie serves no purpose.

Meanwhile on some combination of rate cuts and the possibility that Prime Minister George Papandreou will not last long enough to even get a vote on the referendum (see Greek PM is History says Governing Socialist Lawmaker; Papandreou has Single Vote Majority in 300 Seat Parliament; Emergency Cabinet Meeting Called for details), S&P futures swung a whopping 40 points in overnight action. 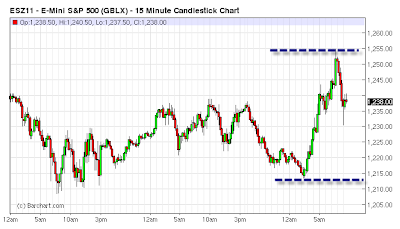 As I said yesterday, the equity markets are acting like a yo-yo on steroids rallying every time there is a hint of a bailout and falling every time it appears there is a change in bailout plans.

This is certainly not a healthy stock market. It is however, good for the price of gold, up more than $200 from the recent low. 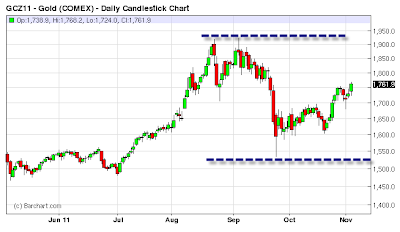 There is absolutely nothing for the markets to be giddy about. China is slowing, Europe is in a recession, and the US is in recession or headed for one.

Moreover, and as I have repeatedly said, the heart of the Eurozone "batting order", Portugal, Spain, and Italy have yet to be fully heard from.

Meanwhile the bond market finally did react to the rate cut with the Italian 10-Year yield falling by 5 basis points. 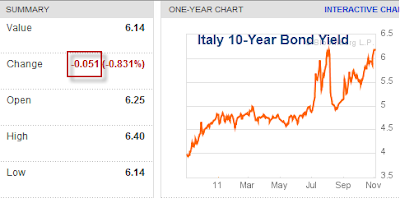 It takes a 25 basis point cut to get a 5 basis point reaction if one measures to the previous day. At that pace the 10-year yield will be at 5.75% with gold at something like $2200 and the ECB's rate at .25% matching the Fed Fund Rate. Then what?

Things look a little better (or worse) depending on your point of view if measured from the day's high yield at 6.40%. However, the ECB certainly will not be in a position to cut rates every time Italian bond yield surge forward.

Moreover, if the ECB becomes the buyer of only resort for Italian bonds, it will quickly consumer the entire EFSF.

All things considered, this euphoria over a rate cut is senseless, and if you are looking for reasons to own gold or to get out of equities, you have both.