Equity futures are falling this morning following a miss on both the headline Nonfarm Payrolls and Private Payrolls which came in respectively at 80,000 and 104,000 on expectations of 90,000 and 120,000. The Household Survey rate, however, supposedly fell from 9.1% to 9.0%, cough, cough, wink, wink. The dollar is higher, bonds are flat, oil is down slightly, gold & silver are down slightly, and food commodities remain in their tight range of late.

Of course it is the Unemployment Rate that the media always quotes to permeate the American psyche, now they get to say 9.0% while acting ignorant of the manipulation that causes this figure to be less than half of reality. And yes, I’m going to say it, we’re getting closer to election time, and no, I do not put manipulation of the data past anyone at any of the .gov data agencies. In fact, I now consider .gov to be an extension of .fed.

There were several fairly large adjustments in this report, the Birth/Death model all by itself added more jobs than were reported here, there were large upward revisions to the past two months, and there were large changes to the numbers of “discouraged” and part-time workers. Also, the number of people counted “not in labor force” rose, and that makes their math appear better, the opposite occurs on months it falls. Here’s Econospin doing their best pump-monkey, note that with the higher previous month revision how they didn’t come out and say that, “Payroll jobs fell by 78,000 from the month prior.” Watch what I’m saying here, you will see that when it can be spun positively it will be, but it is never spun negatively, and thus the positive bias to keep their self-interest central banker box alive:

Highlights
The headline number for October payrolls was a little disappointing but upward revisions were more than offsetting. Payroll jobs in October posted a gain of 80,000 after rising a revised 158,000 in September (originally 103,000) and increased a revised 104,000 in August (previously 57,000). Market expectations were for a 90,000 boost for the latest month. Revisions for August and September were up net 102,000.

As in recent months, greater strength was seen in private nonfarm payrolls which advanced 104,000, following a 191,000 rise in September and a 72,000 increase in August. The October increase was lower than the market median forecast for a 120,000 increase.

In the private sector, goods-producing jobs were tugged down by construction but with manufacturing and mining partially offsetting. Goods-producing jobs declined 10,000 after a 29,000 boost in September. Construction jobs fell 20,000 in October after rebounding 27,000 the month before. Manufacturing employment gained 5,000 after a 3,000 dip in September. Mining advanced 6,000, following a 4,000 gain the prior month.

The public sector contracted as government employment fell 24,000, following a 33,000 decline in September. Most of the October decrease was in the non-educational component of state government.

Earnings were moderately healthy as average hourly earnings in October rose 0.2 percent, following an upwardly revised 0.3 percent the month before. Analysts had forecast a 0.2 percent increase. The average workweek for all workers in October was unchanged at 34.3 hours. Analysts called for 34.3 hours.

The October employment report is about as expected net. The best news was the upward revisions to payroll employment and the continued gains in household employment. These suggest that there might be a little more momentum than seen in the headline payroll number for October. The upward revisions might also help explain moderate strength in retail sales in recent months.

On the news, equity futures rose somewhat but slipped later.

Note that construction took another hit, month after month, years now of contracting construction and manufacturing. What we now manufacture is money and false statistics.

Below is the entire report from the BLS:
Employment Situation November 2011

On the Alternate table we can see that unadjusted U-6, that most closely resembling how it was calculated in the past, fell to 15.3%, while the adjusted data fell to 16.2%. These numbers can shift based on underlying counts and categorizations: 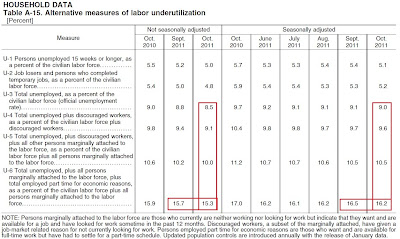 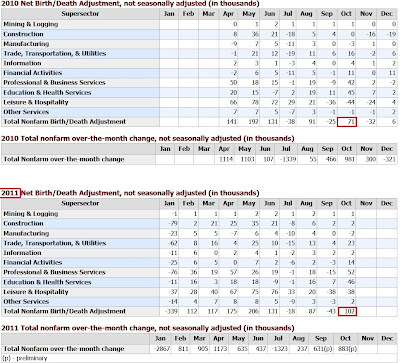 Without that one manipulation alone, the headline numbers would have been negative. My take is that the economy continues to lose jobs, in fact has not produced a single job in years despite the population continuing to grow. We are currently just like Japan in that we foolishly continue to print debt money which destroys real production and real jobs while we manipulate the data to create apparent “growth” so that politicians and “Fed” monsters can continue their snow jobs.

Of course the people are wising up to the disconnect between the false statistics and the spin, thus we are beginning to see more of them on the streets as unemployment checks and food stamps won’t keep the population happy forever. That’s simply not the future I want for my children, no one does.

If you want to see reality, John Williams is still tracking the unemployment numbers without all the manipulations – try 23%:

The stock market has created a Head & Shoulder’s pattern where it looks like the right shoulder has completed. This pattern is seen throughout the markets, especially in the financials. Below is a 20 day, 30 minute chart of the SPX (S&P 500) where you can see the neckline at the 1,215 level. If that level is broken in the next few days, then the target on this pattern will be in the vicinity of 1,140ish, manipulation in Europe, the U.S., Japan, the bond market, the currency market, false flags, and “QE” announcements excluded: 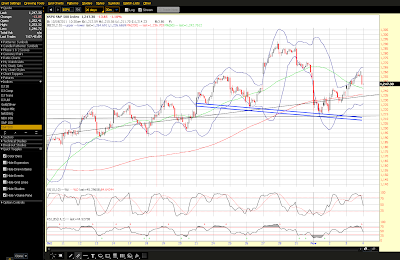 All “investments” carry some risk, please consult your investment advisor who will tell you that there’s never been a better time to buy, dollar cost average, buy the dips, and oh, look at the shiny new ETF derivative that loses 3% a month even though you bet in the correct direction.

In other news, Nobel Prize winning economist, Paul Krugman, says that, “more debt is needed to cure our debt problem.”

Meanwhile in Japan, you can see children glowing in the dark, yet our captured “regulators” are too narcissistic to take even a modicum of action. Good thing the Japanese government knows what to do:

Tokyo Electric Power Co. won approval for a 900 billion yen ($11.5 billion) bailout from the government after the Fukushima nuclear catastrophe to avert bankruptcy and start paying compensation for the crisis.

Trade and Industry Minister Yukio Edano approved the support after the company known as Tepco committed to cutting 7,400 jobs and 2.5 trillion yen in costs. The utility forecast an annual loss of 600 billion yen, its second since the March earthquake and tsunami wrecked its Fukushima nuclear plant.

Now there’s some proactive regulating right there! Arnie Gunderson comes at us again with the hot particle good news/ bad news scenario, don’t think I’ll be traveling to Japan anytime soon, and I can only wish that our government and “regulators” weren’t as captured as they are: